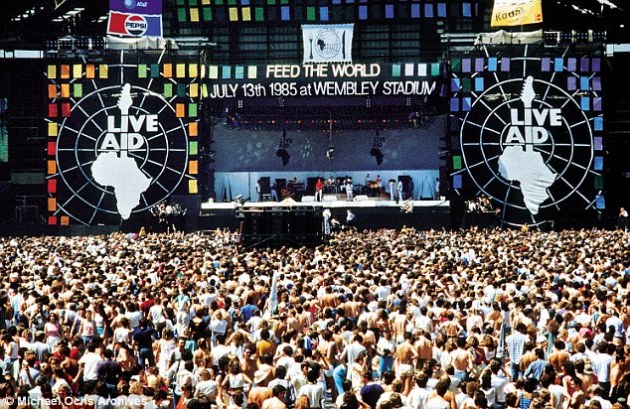 With barely a mention in the media or press, Live Aid turns 30 today.

I was a very excited 12-year-old pop fan on Saturday 13th July, 1985. The weather was hot and sunny and the whole nation seemed united. On the morning of Live Aid, my dad drove us up to the Virgin Megastore on Oxford Street where I bought cassettes of Level 42’s A Physical Presence and Scritti Politti’s Cupid And Psyche ’85 in preparation for the day. The streets were almost deserted. We got home around midday, turned the telly on and settled in for the afternoon.

That was then but this is now, as ABC sang. But how does the music from that day stand up in 2015?

Though many of New Pop’s architects got in on the act, it was the older artists who – for better or worse – made the biggest impact on the day (Queen, Tina Turner, Phil Collins, Status Quo, Dylan, Led Zep, Dire Straits, The Who, Bowie, Jagger). Apart from Led Zep and Dylan’s hilariously dodgy turns, Live Aid reminded people that the oldies were still hungry and could still cut it live, and the event arguably ushered in the mainstream success of Peter Gabriel, Steve Winwood, Eric Clapton and Robbie Robertson.

Many of the youngsters fudged it: Spandau were shown up by their lack of musicianship and quality material, Adam Ant chose the wrong songs, Sade were dull, Style Council were shrill and under-rehearsed, Duran were hamstrung by LeBon’s famous vocal boo-boo, Paul Young and Alison Moyet cornily rehashed some very old soul-revue moves and The Thompson Twins sounded out of their depth despite backing from Madonna and Nile Rodgers.

Perhaps surprisingly, U2, Madonna, Howard Jones, George Michael and Nik Kershaw might just have been the best ambassadors of Pure Pop on the day with engaging performances and solid musicianship. Post-punkers such as Sting, Elvis Costello and The Cars were merely functional.

Naysayers claim that most of the acts appeared simply to further their careers. Well, yes, surely that was a factor for the younger artists but it’s a crushingly cynical view. Anyway, did you buy ANY music as a direct result of seeing Live Aid on the box (Queen’s Greatest Hits doesn’t count)?

I just enjoyed it for what it was. Anyway, most of my favourite pop acts didn’t get anywhere near Live Aid (Scritti, Jacko, Propaganda, Level 42, Prefab). It’s hard to really complain when the event has raised over £150 million.