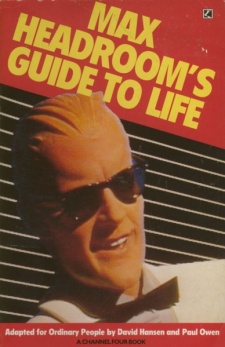 Max was created in 1985 by Annabel Jankel (sister of Ian Dury-collaborator Chaz), Rocky Morton and George Stone as rather eccentric, attention-grabbing ‘talking head’ to present videos on the burgeoning Channel Four (actually, with hindsight, it’s strange that no other terrestrial TV channels had aped the MTV format before Max came along).

Brilliantly played by Matt Frewer, who apparently had to endure over four hours in the make-up chair before each day of filming, Max was born in a one-off drama that played on Channel Four in 1985.

I think it’s fair to say people either loved or hated Max. I confess I was an immediate fan. I even bought the book! Large swathes of his monologues are indelibly etched on my memory – maybe they tapped into how my teenage mind was being wired. Even today, I can’t hear the words ‘Sebastian Coe’ without thinking of Max’s unique delivery.

I also discovered some good music and vids on his shows too, including Peter Gabriel’s live version of ‘I Don’t Remember’, The Redskins’ ‘Bring It Down’, Donald Fagen’s amazing ‘New Frontier’ vid (directed by Jankel and Morton) and Sid Vicious’s terrifying ‘My Way’ (how did that get onto pre-watershed TV?).

Most of the press attention was aimed at the state-of-the-art computer graphics, his incredible make-up job and bizarre speech patterns. But, apart from the music vids, what immediately hooked me was his smarmy, gleeful piss-taking.

He was kind of a mixture of Fletch and Johnny Rotten. There was also a touch of Dan Aykroyd/Chevy Chase’s portentous Weekend Update newsreaders on ‘Saturday Night Live’.

Though the show had three regular writers – David Hanson, Tim John and Paul Owen – Frewer apparently improvised a large part of Max’s ramblings. I always assumed Max’s ‘cool guy’ persona was coming from Steve Martin (with a soupçon of David Byrne’s big suit from ‘Stop Making Sense’), but Frewer claims that he based Max’s shtick on Ted Knight’s hilariously hammy portrayal of Ted Baxter in ‘The Mary Tyler Moore Show’. This performance was new to me, but watching it now makes perfect sense. I’ve always been a huge fan of Knight’s brilliant turn as Judge Smails in ‘Caddyshack’. 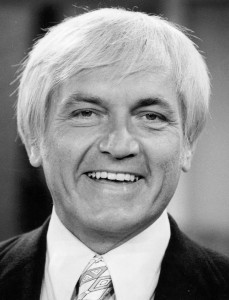 Possibly the sections of the show which have the most relevance now are Max’s interviews with stars like Sting (see below), Boy George and David Byrne.

Years before Dennis Pennis, he was hilariously detached, if not downright dismissive of their celebrity status. I love the way he ridicules Sting’s new ‘jazz’ direction.

Later on, the tables were turned as Max found himself being interviewed on primetime chat shows by David Letterman and Terry Wogan. He calls Letterman ‘Davey-doo’ throughout and seems to be slowly driving him to distraction.

Max signed off from his UK TV series with a rather lovely little ballad, which, I confess, still threatens to put a lump in my throat. Hey, I know, the mid-life crisis is kicking in big-time…

I had a few episodes on video for many years but chucked them out a while ago – a big mistake, as there’s still no sign of a UK DVD.