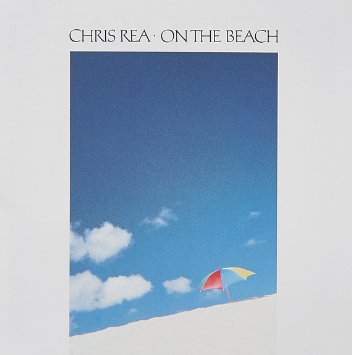 Rea has – a little unfairly – never quite been able to escape a slightly dodgy image here in the UK, but, along with George Michael, he was probably the most popular male British singer/songwriter of the late ’80s and early ’90s.

The breakthrough/breakdown was his 1989 single/album ‘The Road To Hell’, so close to the Dire Straits sound as to be almost parody. I preferred the more laidback, distinctive Rea of the mid-’80s.

He started out pushing the glossy AOR and light, folky pop, enjoying a huge US hit with ‘Fool If You Think It’s Over’ in 1978 (later claiming that early producer Gus Dudgeon had blunted the ‘bluesier’ elements of his sound).

His career seemed to be hitting a cul-de-sac in the early ’80s, but On The Beach was one of the albums that turned things around, the beginning of his commercial era

It taps into the same kind of jazzy, introspective pop/soul sound that the likes of John Martyn, Joni Mitchell and Van Morrison were flirting with in the same period, helped by an excellent band including Fairport Convention/XTC drummer Dave Mattacks, Martin Ditcham on percussion and Max Middleton on keys.

Rea also plays an impressive array of instruments himself, including fretless bass and synth.

Listening in one sitting to On The Beach again, the first thing that struck me is its almost relentlessly downbeat vibe. But the opening title track, with its lilting Latin-tinged groove and jazz chords, perfectly introduces the album’s themes of lost innocence and childhood reminiscences.

The moment when Mattacks lays into his fat snare drum for the first time is one of my favourite ’80s drumming moments.

‘It’s All Gone’ ups the ante with some subtle Donald Fagen-style synths and excellent lyrics, and the groovy extended outro is close enough for jazz/funk with some empathetic Mattacks drums alongside Middleton’s fine Fender Rhodes solo.

On The Beach was a decent hit in the UK, reaching 11 in the album chart and selling over 300,000 copies. After this, Rea’s music became increasingly rootsy with elements of blues, country and rock’n’roll; he started channelling Dire Straits and ZZ Top rather than John Martyn and consequently enjoyed much more commercial success.

But On The Beach‘s four or five choice tracks are still my favourite Rea moments of the ’80s.

4 thoughts on “Chris Rea: On The Beach 30 Years Old Today”