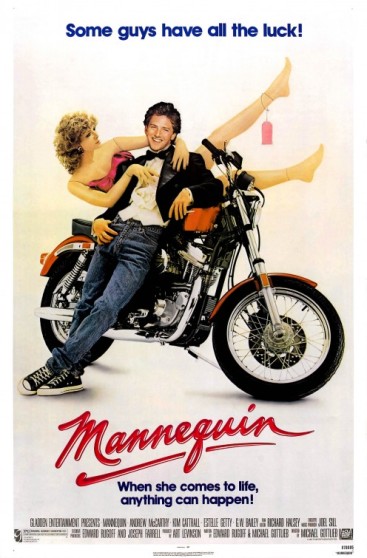 You know the drill – it’s a few days after Christmas and the house is finally quiet. You sink into the sofa with a deep wish to indulge in some serious comfort viewing.

A guilty pleasure would be perfect, maybe a light Hollywood comedy, late-’80s style, something along the lines of ‘Vice Versa’, ‘Baby Boom’, ‘Innerspace’ or ‘The Money Pit’.

‘Mannequin’, starring Andrew McCarthy, James Spader and Kim Cattrall, would appear to fit the bill. Decent cast. You haven’t heard of the director (Michael Gottlieb) but surely he can’t fail with that kind of ammo.

So you settle in expectantly. But after a few minutes it’s pretty clear that ‘Mannequin’ is sub-‘Splash’, high-concept dross, and it becomes hard to take your eyes off a bona fide turkey…

McCarthy plays a ‘quirky’ department-store window dresser who falls in love with a showroom dummy (Cattrall). The kicker is that she ‘comes alive’ at night only for him, a state of affairs closely monitored by the shop’s prissy vice president (Spader) and Rambo-obsessed security guard (GW Bailey).

Spader – one of my all-time favourite actors – gets top marks for effort but is hideously miscast. He usually has the ability to rise above apparently ‘unsuitable’ material (see ‘The Rachel Papers’ and ‘The Music Of Chance’) but not here.

Ditto McCarthy. As an actor, on the evidence of ‘Class’, ‘Pretty In Pink’ and ‘St Elmo’s Fire’, he definitely had something, even if often ‘helplessly sucked down by the undertow of female desire’ with ‘a pair of panicked eyes that bulge out like those of a deer caught in headlights and a mouth stuck in the permanent pucker of a cat’s asshole’, in the memorable words of Jonathan Bernstein.

Andrew McCarthy and a dummy. The dummy is on the right…

But here he (quite understandably) fails to decipher any of his character motivations, ending up either gazing ‘soulfully’ into the middle distance or yelping nonsensically. Not helped by a horrendous script, his line-readings barely make sense.

Poor Cattrall has a completely thankless role as an oppressed Ancient Egyptian who is put under a spell and then reincarnated as a mannequin (don’t ask). Elsewhere, Steve Vinovich makes for a terrible baddie, his performance barely exceeding am-dram level.

Gay and black stereotypes are hurled around willy-nilly and there’s even a large dose of weird corporate sexism thrown in for ‘comedy’ purposes.

The director and editor conspire to extend every shot just too long, killing any potential giggles. The score is awful too, with blaring sub-Harold-Faltermeyer synths and over-loud drum machines throughout (though there have been many worse movie themes than the Albert Hammond/Dianne Warren-composed, Narada Michael Walden-produced ‘Nothing’s Gonna Stop Us Now’, the UK’s second-biggest-selling single of 1987).

But, in its own way, ‘Mannequin’ laid down a marker in Hollywood, arguably influencing the crap/ infamous ‘caper’ movies of the early ’90s such as ‘The Adventures Of Ford Farlaine’ and ‘Hudson Hawk’ etc. So at least we have that to ‘thank’ it for…