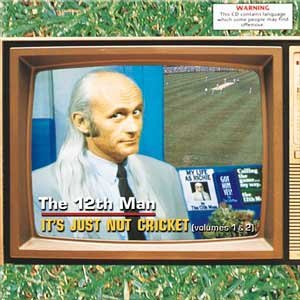 For me, it was seeing the touring West Indies team at Hove in 1980. Botham’s Ashes a year later sealed the deal.

And I confess: until a couple of weeks ago, when the Ashes were relinquished, over the last few months my first waking thought had generally been: what’s the score in the cricket?

Alas, ‘we’ have been out-played, out-muscled and out-thought by the Aussies. Miserable England fans can move onto other more important things (if there are any).

For now, I’ll console myself with ‘The 12th Man’, Billy Birmingham’s irreverent comedy sketch series born in the early 1980s when Australian cricket was in a less-than-cockahoop state.

Inspired by Channel Nine’s popular and extensive cricket coverage on Australian TV, ‘The 12th Man’ features Birmingham impersonating respected broadcasters (Richie Benaud, Bill Lawry) and then-current players (Javed Miandad, Geoff Lawson, Allan Border, Steve Waugh) alike, ripping the p*ss out of all and the state of Australian cricket in general. But you always feel the love and respect behind the mockery.

A ’12th Man’ tape was briefly passed around my mates at school and had the cache of something really illicit, almost forbidden. Listening back now, it still raises a titter though one wonders how Birmingham got away with some of the more un-PC stuff.

It’s scant consolation for another Ashes mullering on their patch, but so be it…

7 thoughts on “Avenging The Ashes: The 12th Man”