Regular readers will know that I’m a big guitar connoisseur, and the ’80s offered up a smorgasbord of great players.

With hindsight, it seems completely logical for these two giants to record together, and their two collaborations are engaging if annoyingly inconsistent.

1982’s I Advance Masked (great title, surely Fripp’s) is under-produced, tentative and unfinished-sounding, and this approach works fine on the beguiling title track (which prompted one of the worst videos of the decade… see below) and evocative ‘Hardy Country’ where strong themes carry the day.

But the duo’s limitations as multi-instrumentalists hamper the rest of the album – the drum programming is limp, bass playing fairly amateurish and the synth playing simplistic (though sometimes perversely enjoyable in a kind of sub-John Carpenter way). The shorter tracks seem to be searching in vain for some status as ‘ambient’ or ‘environmental’ music but are just too quirky for that purpose. It’s all a bit ‘two men and a drum machine’.

What the album does offer are fascinating examples of the kinds of guitar woodshedding the players were doing in the early ‘80s. Summers is in full-on Ghost In The Machine mode with meshes of swelling guitar synth and simple, incongruously bluesy solos, while Fripp explores the arpeggiated, polyrhythmic ideas which would find fruit on Crimson’s Three Of A Perfect Pair a few years later.

But, for me, some of the album, especially ‘Hardy Country’, will forever be associated with Fripp’s corner of Dorset, mainly due to its use in a brilliant Fripp BBC2 documentary from the mid-‘80s. Take a walk around Badbury Rings with ‘Hardy Country’ playing in your lugholes and you’ll see what I mean. 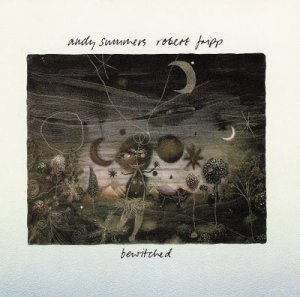 1985’s Bewitched is a dramatic improvement on the first album. It features attractive melodies, well-thought-out song structures, (mostly) real drums, some incredible bass playing from Chris Childs and ex-League of Gentleman/Gang of Four Sara Lee, pristine mastering and more of a ‘band’ sound.

The opener ‘Parade’ flies out of the traps with New Wave drums and an engaging little synth guitar melody. With its major-chord exuberance and very short duration, it could easily have come from side one of Bowie’s Low.

‘What Kind Of Man Reads Playboy’ is pretty much a perfect distillation of the state of the electric guitar in the mid-‘80s. Summers’ ingenious layering takes in wah-wah funk, harmonic washes, bebop, bluesy leads and tasteful guitar-synth textures. Fripp also plays one of the most extreme solos of his career while Sara Lee (or is it Chris Childs?) impresses with high-speed soloing and tasty grooving.

Unfortunately, side two is more in line with the debut album, a series of rather uninteresting, short and badly recorded tracks. Think ‘Behind My Camel‘ in demo form but without Stewart Copeland. But the best is saved until last, the stunning closer ‘Image And Likeness’ featuring Summers’ cascading harmonics.

On these two albums, Fripp generally takes a back seat and basically provides a framework for Summers’ talents to shine through. An admirable position for sure, but he was becoming a bit like the Wayne Shorter of guitar at this point, happy to be in the shadows. But this is in general an intriguing and somewhat overlooked collaboration calling to mind an era when big labels were putting some serious money behind instrumental music and ‘rock’ was allowed to be intelligent.