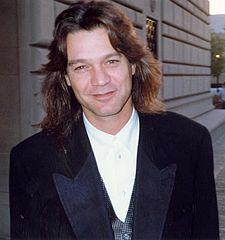 When I think of ’80s Eddie Van Halen, the image in my mind’s eye is probably not a lot different to any other fan – he’s grinning from ear to ear, cavorting around the stage, playing some of the greatest rock guitar of all time with one of the sweetest tones.

So it’s interesting to see him recently – sober, reflective, brutally honest, fiercely independent – talking about his life and craft onstage at the Smithsonian Museum of American History in Washington DC.

‘Jump’ had always been a favourite of mine and was at the back of my mind when I came across Van Halen’s superb debut album at Harry’s Records in Twickenham (another one that’s bitten the dust), during my first week of sixth-form college in 1989.

I just loved the devil-may-care feel of Eddie’s playing. He was fearless, unconcerned about making mistakes (his dad gave him some advice: if you make a mistake, do it again – with a smile), the same attitude that spurred on Parker, Ornette, Hendrix and Jaco.

I later got heavily into the VH albums Women And Children First, Fair Warning, Diver Down, 1984 and OU812, but the band have been completely off my radar since the early ’90s, when I loved the ‘Poundcake’ single.

Having said that, not living in the States, I’ve completely missed the recent new album and TV appearances featuring David Lee Roth back on vocals. Maybe I need to check in again because I dug this:

Anyway, back to the interview. It’s fascinating hearing Eddie chatting about his life and career, away from all the controversy that has dogged the band over the last few decades.

He talks about building his first guitar, the last album he bought (clue: it was back in 1986 and by an English singer who was once in a very famous progressive rock band…), demonstrates some techniques and talks candidly about his sometimes difficult early life as an immigrant in the USA.

G’wan – give yourself an hour off and enjoy some words from a master.

5 thoughts on “Catching Up With Eddie Van Halen”