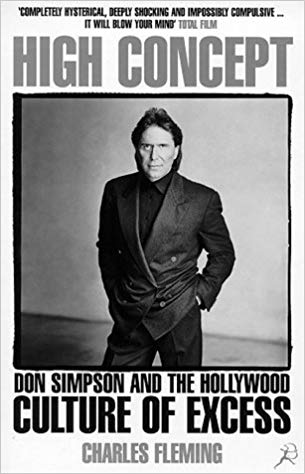 Director Robert Altman once said of his classic 1992 satire ‘The Player’: ‘What we show is a very, very soft indictment of Hollywood’.

Revisiting Charles Fleming’s excellent, coruscating ‘High Concept’, one can easily believe it. It is to the ’80s and ’90s movie scene what Peter Biskind’s ‘Easy Riders, Raging Bulls’ was to the ’60s and ’70s.

The main focus of the book is Don Simpson, producer of ‘An Officer And A Gentleman’, ‘Flashdance’, ‘Beverly Hills Cop’, ‘Top Gun’ and ‘Days Of Thunder’. He died in 1996 at the age of just 52.

‘High Concept’ explores this fascinating, contradictory character; an egotistical monster who was also inordinately generous to friends and relatives; a rampant egomaniac and alleged sex pest who was nonetheless haunted by his God-fearing Alaskan upbringing; a producer best known for lowest-common-denominator fodder but described by various people as a creative genius whose 30-page memos to screenwriters became legendary. Many also heralded his uncanny ability to find a screenplay’s crucial flaw.

Both the Simpson character and this book feel incredibly prescient. He comes across as half Trump, half Weinstein. There are endless stories that could have sparked a #MeToo moment had Twitter been around in the late ’80s.

He flourished at a time when corporate skullduggery in the movie business was a given. You could get away with anything as long as the studio was profitable. As Fleming puts it, ‘As long as he didn’t kill anyone he was always going to be welcomed back. If he did kill someone, well, arrangements could be made’ (indeed Stephen Ammerman, a doctor, was found dead at Simpson’s pool house in 1995).

Other people very much in Simpson’s orbit included Heidi Fleiss, OJ Simpson and Kato Kaelin. He was ahead of his time but always went too far. Or, to put it in Simpson-speak, ‘Anything worth doing is worth overdoing. It’s not enough until it’s too much. Because how do you know it’s enough until it’s too much?’ Fad dieting, plastic surgery, Scientology, junk food, kinky sex, prescription drugs, cocaine – they were all meat and drink to him.

Simpson was also always super-competitive, in the classic ‘Wall Street’ style, from day one. Late in his career, he said: ‘Anytime I see someone come into the business who is smart and talented…and likes to go to lunch and dinner…I know he was failed already. He hasn’t got a prayer. Because someone like me is going to run all over him…’

Fleming – an experienced, respected movie writer who has contributed to Vanity Fair, LA Times, Variety and Newsweek – writes superbly, with natural elan and a swinging turn of phrase. Along with ‘Indecent Exposure’ and ‘Easy Riders, Raging Bulls’, ‘High Concept’ is the best book I’ve read about the darker side of modern Hollywood.