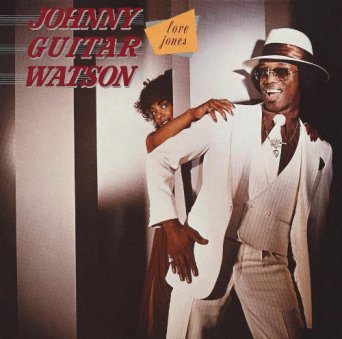 When it comes to the arts, ‘nobody knows anything’, as screenwriter William Goldman famously claimed.

But the music biz sure knows a good formula when it sees one. And in the late-1970s and early ’80s, formulas didn’t come much more successful than Johnny Guitar Watson’s.

His fusion of funk, blues, disco, jazz and R’n’B even gave Parliament/Funkadelic and Earth, Wind & Fire a run for their money. He was simply one of the coolest musicians ever to walk the planet.

A Texan blues master who influenced many guitarists including Frank Zappa (the two would collaborate regularly in the ’70s and ’80s), Watson relaunched his sound with Ain’t That A Bitch in 1977, a superb marriage of hilarious lyrics, double-tracked vocals, cool Stevie/Sly/Curtis grooves, ambitious horn arrangements and searing guitar solos. It was a big success and Watson spent the rest of the ’70s repeating the formula with minor variations and, to be honest, diminishing returns.

Ain’t That A Bitch hooked me right away. My dad had a knackered old cassette copy which came in a really horrible silver-and-yellow design, but for some reason I was fascinated by it. There was something seriously dodgy about the cover photo, title and…everything, really. But then I listened to it. By the late ’80s, I was getting into Sly, Stevie and The Isleys, so Bitch fitted in like a dream and became an essential soundtrack to summer 1989.

On 1980’s Love Jones, Johnny expanded his sound to include influences from P-Funk, gospel, bebop, bossa-nova, Afro-beat, hip-hop and even country, and the result is one of the weirdest but most interesting albums of his career. A lot of it sounds very rushed, as if his mind wasn’t really on the job, but that sometimes works in its favour!

With hindsight, Johnny should be included alongside Sly, Prince, D’Angelo, Stevie and Lewis Taylor as one of soul music’s finest multi-instrumentalists – on his great albums of the 1970s and early ’80s, he plays all the keyboards, bass, guitars and some drums, as well as producing and arranging.

His keyboard playing gives guys like Ramsey Lewis and Les McCann a run for their money, and he even once recorded a whole album of piano/vocal ballads, 1963’s I Cried For You.

Love Jones kicks off with the infectious ‘Booty Ooty’, powered by the great, unsung drummer Emry Thomas, which adds a touch of P-Funk to Johnny’s classic horn-driven sound.

The title track is a fairly cheesy soul ballad, while ‘Goin’ Up In Smoke’ continues his strand of state-of-the-nation political funk/blues tunes which began with Ain’t That A Bitch‘s title track in ’76. ‘Close Encounters’ is just plain odd, a bossa-nova with some funny lyrics about a mistaken love affair – ‘It was close encounters of the wrong kind’!

His update of ‘Lone Ranger’ is a classic, featuring some outrageous vocal scatting and some nutty electric piano and bass solos. The gospel curio ‘Jet Plane’ has a criminally-out-of-tune bass, badly-recorded keyboards and amateurish drums (presumably played by Johnny), but it still works.

Ditto the seriously weird ‘Children Of The Universe’, a country-rock coming-of-age piece which sounds like The New Seekers backing Sly Stone.

But Love Jones‘s centrepiece is of course the mighty ‘Telephone Bill’, oft cited as one of the first rap tracks. In 1994, Watson was asked if he had anticipated the hip-hop movement:

“Anticipated? I damn well invented it! And I wasn’t the only one. Talkin’ rhyming lyrics to a groove is something you’d hear in the clubs everywhere from Macon to Memphis. Man, talkin’ has always been the name of the game. When I sing, I’m talkin’ in melody. When I play, I’m talkin’ with my guitar. I may be talkin’ trash, baby, but I’m talkin’!”.

Yessir, but more importantly the track features his best guitar solo on record, an amazing mash-up of bebop, blues and funk.

Compared to the lush, meticulously-arranged Ain’t That A Bitch, Love Jones sounds like a series of demos but it still works, like pretty much all of Johnny’s music. He carried on touring and recording right through to his death in 1996. I wish I’d seen him play live. See ya, Johnny.