One of the nice things about immersing oneself in ’80s music is rediscovering stuff you’d once dismissed or were too young to really investigate.

I must have been vaguely aware of Siouxsie’s music at some point in the decade, but she didn’t really appear on my radar until I started to get interested in the Sex Pistols around the early ’90s (she was famously in the studio during the Pistols/Bill Grundy ‘swearfest’ and even had the misfortune of being ‘propositioned’ by the semi-sloshed presenter…). 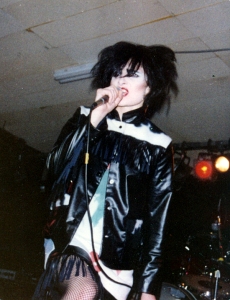 In these days of twee, over-sharing singer-songwriters and soul-deadening ‘rock’ bands, what is immediately appealing about Siouxsie and the Banshees is their absolute earnestness, the total lack of irony. They mean it, maaaan.

These days, pop bands flirt with magickal images, shamanistic sounds and boundary-pushing lyrics, but the Banshees really were dark and truly an alternative (or reaction?) to shiny, aspirational Thatcherism. The song titles said it all: ‘Halloween’, ‘Nightshift’, ‘Voodoo Dolly’, ‘Arabian Knights’.

They also flew in the face of punk, totally rejecting the ‘DIY’ ethos. As bassist Steve Severin told Simon Reynolds in the excellent ‘Totally Wired: Post-Punk Interviews And Overviews’:

‘I never understood where that do-it-yourself ethic came from. It was so patently obvious that not everybody could do it. You had to have a modicum of talent and an original idea. But for one moment, the floodgates opened and everyone had their five minutes, put their single out, and then disappeared back to what they were destined to do in the first place.’

The Banshees began the decade with three classic albums of their kind: Kaleidoscope, Juju and A Kiss In The Dreamhouse (best album title ever?). It was no accident that they all featured one of the great British guitarists in John McGeoch, master of inventive chord voicings and creative layering.

By 1982, though, it has to be said that they had also turned into a truly Bacchanalian outfit, with copious drug use, booze breakdowns and all kinds of weird rituals.

McGeoch was sacked after collapsing onstage in Madrid, apparently as a result of an alcohol-induced nervous breakdown. (He re-emerged with The Armoury Show before becoming a member of PiL between ’86 and ’92. He died in 2004.)

The Cure’s Robert Smith filled in on guitar when McGeoch left, as he had at various times between 1979 and 1983 (Polydor Records apparently tried and failed to ‘merge’ The Cure and The Banshees towards the end of this period).

He later said of his tenure in the Banshees: ‘It allowed me to go mad for a period of time. I had no responsibilities. I just had to turn up and play the guitar. Severin and I became good friends. Our friendship was based entirely on altered states. I’ve never felt as bad in all my life as when I was in the Banshees. I reached a point of total collapse in 1983.’

Siouxsie herself has revealed that she was on an LSD jag around ’82 and ’83, particularly inspiring the songs on Dreamhouse. Recently, she told MOJO magazine: ‘I seem to remember “Cocoon” being written whilst I was tripping. I was in a rented flat and if I didn’t have a notebook I used to write on the wallpaper.’

The band’s early ’80s period was also musically very influential. There were those effective, trademark tempo changes – usually a slowish intro that suddenly gathers momentum in the verse. As far as I know, no rock bassist had used a flanger pedal before Severin.

Budgie came up with some arresting tribal rhythms and all their guitarists pretty much wrote the post-punk rulebook. As Robert Smith once said, tongue firmly in cheek: ‘I just used to turn all the effects pedals on – your basic Banshees sound.’ And Siouxsie is always such a powerful vocal presence. You can hear her sound in everyone from the Cocteau Twins and Lush to PJ Harvey and Florence And The Machine.

So here we are. The Royal Albert Hall, 30th September 1983. Siouxsie in her Goth Princess pomp, Robert Smith (who, despite everything, is obviously an excellent guitarist), Steve Severin and Budgie. Wish I’d been there. Were you there (as Shaw Taylor used to say)?