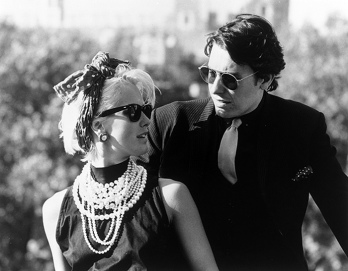 My favourite music show still is and probably always will be ‘The Tube’, which ran on Friday nights between 1982 and 1987 and was presented mainly by Jools Holland and Paula Yates.

Though Jools has found his niche presenting the very successful ‘Later…’ series for BBC1, I preferred the more youthful, risky, ‘uncut’ Holland (who was given a hefty slap on the wrist when he famously trailed the show one week by saying people who watched it were ‘groovy f***ers’!) and he had a great chemistry with the intelligent, funny and sexy Paula.

From week to week, you could never guess what you were going to see. There were live bands, star interviews, specially-filmed videos, on-location featurettes and weird bits of alternative comedy usually involving Rik Mayall in various degrees of drunkenness.

Some of it was great, some of it was OK and some of it was crap, but you couldn’t take your eyes off it. It helped launch some careers (Twisted Sister, Fine Young Cannibals, Frankie Goes To Hollywood, Terence Trent D’Arby) and relaunch others, and you could see every type of music on the show – Metal, Goth, Funk, Fusion, Indie, Pop, Soul – all in the spirit of discovery without any pandering reverence or bourgeois pretension.

And though the show featured many huge names, it also embraced up-and-comers: if your band was any good, had some fans and a decent plugger, you were on. And there was a bar on the set too. Here are a few clips from ‘The Tube’ that have stuck in the memory:

Check out the creepy guy at the front staring straight at Susanna Hoffs throughout, almost blocking the camera. Full marks to the girls for giving the (Prince-penned) song their all despite a dumbstruck Newcastle crowd. Tight harmonies.

One of those great, weird, un-PR’d interviews that popped up now and again. A post-‘Party Fears Two’ Billy is clearly taking the piss throughout, in the nicest possible way, and it also shows how The Tube wasn’t scared of going out into the ‘provinces’ (Dundee in this case).

2. Blancmange – ‘Living On The Ceiling’

Good hair again, and someone or something is making singer Neil Arthur struggle to keep a straight face throughout.

This little Bacharach-influenced bossa nova was my first glimpse of the marvellous Prefab.