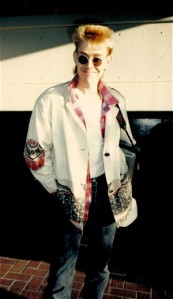 ‘Pocket’ is hard to define but you know it when you hear it. Drummers often say that you’re either in the pocket or you ain’t, and as such the expression is mostly used in association with great US groovemasters like Richie Hayward, James Gadson, Bernard Purdie and Andy Newmark.

But ex-Level 42 drummer Phil Gould has been busy over the last 35 years (and a personal musical hero for about 30 of those) laying claim to be the UK’s premier proponent of ‘pocket’, but he has a lot of other weapons in his arsenal too. Though relatively quiet since leaving Level 42 in 1987 (making a brief return in 1994), Gould pops up on the London live music scene now and again. He also released his first solo album Watertight in 2009.

This 606 gig was very much a Level 42 reunion of sorts featuring keyboards and vocals from Mike Lindup and honorary ‘fifth member’ Wally Badarou, though, in an unexpected but typically generous move from the modest drummer/leader, the focus was very much on excellent vocalists Diana Winter and Sumudu with added support from the superb Yolanda Charles on bass, guitarist Fabio Balestrieri and Alex (son of Phil) Gould on piano and occasional drums.

The opening ‘Madness’ was a reliable portent of things to come, with Gould’s tasty, behind-the-beat groove underpinning some gentle Latin percussion and Mike Lindup’s strong vocals and electric piano. Winter and Sumudu took centrestage for most of the rest of the first set, their voices combining exceptionally well especially on the catchy ‘Supergirl’.

Badarou dusted off a funky, rough-and-ready version of the mid-’80s dancefloor classic ‘Chief Inspector’, adding some piquant synth flavours, while Lindup aired an excellent songwriting collaboration with Billy Cobham and Dominic Miller. Perhaps predictably though, the highlight of the evening was a nifty run-through of the classic Level 42 instrumental ‘Heathrow’, with Charles powering the band superbly and even supplying a note-for-note rendition of Mark King’s original bass part.

On a difficult day for music, with the earlier announcement of David Bowie’s death, Gould provided an uplifting – if very light – evening with lots of healing sounds, fine vocals, lean grooves and good vibes. It’s always a pleasure to hear him at the kit, and it’s also always a pleasure to get down to the 606, one of the great hidden gems of the London music scene.