King Crimson, The Police, Level 42: three of the greatest bands of the 1980s, loved by musicians and non-musicians alike.

But, on the face of it, you might be hard-pressed to come up with too many common musical traits between them (barring the fact that both Sting and Level 42’s Mark King are bass/vocal double threats). 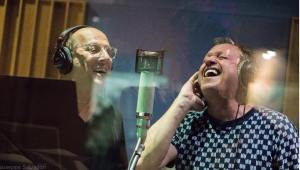 That’s what makes the news of an Adrian Belew (Crimson vocalist/guitarist), Stewart Copeland (Police drummer) and King collaboration so exciting.

What’s also exciting is that in these days of ‘distance’ recording, where musicians regularly email each other sound files for embellishment, never needing to be in the same room, the guys are actually in a studio together.

Copeland of course has had a long, fruitful relationship with bassist Stanley Clarke, who happens to be Mark King’s musical hero, so that makes some sense. But Belew is the real curveball (as he usually is – in the best possible way, of course!).

Adrian has kept followers up to date with the project’s conception and recording progress over on his Facebook page:

‘A bit of information about what we’re doing here in Milan. Gizmo is a recording project created by Stewart Copeland and Vittorio Cosma, keyboard player of Elio e le Storie Tese. (You may remember Elio is the band I played a Bowie tribute with on Italian television back in February).

It is their songs and music. They asked me a while back to contribute guitar and maybe some vocals. recently they asked Mark King to join in on bass and vocals as well. It is not a “supergroup” and there are no plans beyond making this record.

I’m enjoying it very much. Great music and great people making music in beautiful Italy. What’s not to like? We have done three of Stewart’s songs so far and they sound awesome. I must admit Stewart’s songs are custom-made for my guitar playing in the same way as Talking Heads songs were.

Full of nooks and crannies ready to be filled with tasty sonic treats, and always a reserved parking spot for a blistering guitar solo from outer space. And it certainly is gratifying when you finish said solos to have everyone in the control room stand up in a rush of applause!’