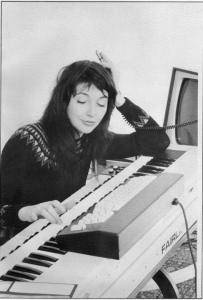 I’m certainly not alone in finding the seaside very evocative of childhood memories and, in turn, musical revelations gone by.

Walking on Slapton Sands in Devon recently, I was taken back to family holidays at St Margaret’s Bay, a little village atop the famous White Cliffs of Dover on the English Channel.

Armed with my Walkman, I’d take off towards the creepy, deserted air-raid shelters, where our boys defended their island from attack, then scramble up the steep chalk track to enjoy the huge expanse of sea in all directions and the French coast in the distance.

The two tracks most redolent of that time – and two which somehow seem to capture something about the English fascination with all things nautical – are Kate Bush’s ‘And Dream Of Sheep’ and Peter Gabriel/Robert Fripp’s ‘Here Comes The Flood’ (not strictly an ’80s track, being recorded in 1978, but originally appearing on the ‘definitive’ 1985 reissue of Fripp’s Exposure album). They are almost indistinguishable to me and will forever be connected to that coastline and the seaside in general.

Gabriel’s sea song was originally recorded for his 1976 debut album in a bombastic, overblown style, very characteristic of its producer Bob Ezrin. But in 1978, during the Robert Fripp-produced sessions for the second album, he laid down a much gentler, far superior piano/vocal version, to which Fripp later added Frippertronics and a spoken-word segment from his spiritual guide and Gurdjieff-follower JG Bennett (who turned up on David Sylvian’s Gone To Earth too). 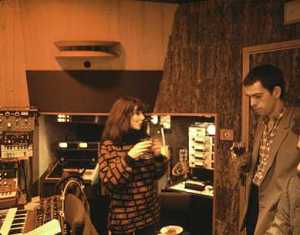 Bennett’s words set up the themes of the song; Gabriel’s lyric seems to point towards the inhabitants of an island (England?) joining forces (telepathically?) to save themselves from a pending (apocalyptic?) tsunami. In doing so, the islanders taken on mystical, extra-sensory powers.

There are shades of the Genesis track ‘Supper’s Ready’, with its epic tale of good versus evil, and also elements of the research into ESP that Gabriel was apparently doing at the time. For some reason, the lyric also always reminds me of John Carpenter’s movie ‘The Fog’. Something to do with bad things coming out of the sea, I guess. Anyway, it all adds up to make a very affecting piece (below paired up with Fripp’s ‘Water Music’ too).

Bush’s version of the sea song kicks off the extraordinary Ninth Wave suite that takes up the entire second side of her classic 1985 album Hounds Of Love. We are thrust unceremoniously into a psychic association with a female protagonist who finds herself in the middle of the sea after a shipwreck. Echoes of past/present obsessions, loves and losses float to the surface of her mind (including the Radio 4 Shipping Forecast), ostensibly to keep her awake so that she doesn’t drown.

The conclusion of the song cycle suggests that she’s now at peace and in a far more positive state of mind, either in death or safe at shore. It’s an incredibly evocative piece of music (and in the same key as ‘Here Comes The Flood’), with Bush truly painting pictures with sound.