There’s no telling how a jazz musician will react to a bad review, whether from a critic or fellow player. Some, like Miles Davis, take a – how shall we put it – stoic view, either refusing to read any press or choosing his writer friends very carefully (Leonard Feather, Quincy Troupe).

But for every naysayer, there’s an aggressor; drum master Tony Williams laid into jazz scribe Stanley Crouch for his less-than-flattering comments on Miles’ electric-era music, while Weather Report famously took Downbeat magazine to task for its one-star slagging of 1978 classic Mr Gone.

Though guitarist Mike Stern had studied at the famous Berklee music school in the mid-‘70s and then landed a top gig with jazz/pop supergroup Blood Sweat & Tears, he wasn’t prepared for bandmate Jaco Pastorius’s succinct review of his guitar playing after a dodgy run through Chick Corea’s ‘Spain’ on tour with BS&T one night – ‘Stern, you know that sh*t wasn’t happening at all! You’ve got to learn faster tempos!’ 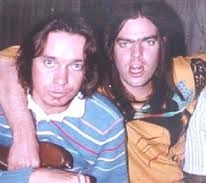 To his great credit, Stern listened to his friend, learnt the tune note by note and in the process became one of the greatest players of his generation. His slick bebop lines played with a ‘rock’ sound were quite new when he came of age playing with Billy Cobham’s band.

Miles was also listening closely while he was in the early stages of putting together his ‘comeback’ band in early 1981. The story goes that he appeared in the front row of The Bottom Line club in New York City and poached Stern during a break, apparently even calling Cobham off the bandstand in the middle of a tune to issue his intentions!

Stern was then summoned to the Columbia Records studio to record the electrifying half-time strut ‘Fat Time’ (Miles’s nickname for Stern) in one take. The track appeared on the Man With The Horn album and Stern was then invited to go out on the road with Miles.

My dad took me to see Miles at the Hammersmith Odeon in 1982, my first proper gig. I’m sad to say that I don’t recall much about it apart from Miles’s white suit and someone shouting: ‘Turn the trumpet up!’ 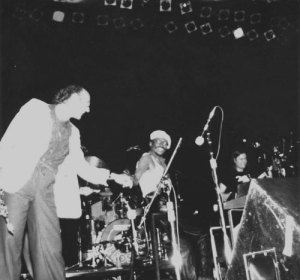 Critics were harsh on Stern, not believing that a chubby, jeans-wearing, long-haired guy playing a white Strat with a fuzzbox could play ‘jazz’, but with hindsight he did a brilliant job of holding down the harmony and delivering powerful, surprising solos in the keyboard-less quintet.

But the demons that haunted some of his early career wouldn’t go away. Stern recently said, ‘I played about two gigs in my life between the ages of 12 and 32 when I was sober’.

Miles even got John Scofield into the band as second guitarist to cover for his increasingly unreliable secret weapon. Stern eventually missed a flight and got the boot, but after a successful spell in rehab returned to play with old friend Michael Brecker and Mike Mainieri’s fusion supergroup Steps Ahead.

Stern also put together a solo record deal with Atlantic Records and began working on Upside Downside in early 1986 with his late friend and fellow shit-hot guitarist Hiram Bullock in the producer’s chair.

The album is a great excuse for Stern to play the hell out his guitar in a variety of idioms. The uptempo tracks are blessed with typically fiery solos while the ballads beautifully demonstrate Stern’s lyrical side, his Telecaster screaming emotively above Dave Weckl’s subtle drumming and Mark Egan’s springy bass.

Jaco completists will enjoy one of his very last recorded contributions on the raucous ‘Mood Swings’ while saxophonist David Sanborn’s playing on ‘Goodbye Again’ is spine-tingling. But mainly the album is a must for any lover of the guitar. His sound is a little more fluid and widescreen than on recent albums and there’s no-one quite like Stern at the top of his game, a fusion of Charlie Parker and Roy Buchanan.

Mike made two excellent follow-up albums later in the ’80s, Time In Place and Jigsaw, both produced by the fine guitarist Steve Khan. For me, this was Stern’s best era, when his raunchy playing was closer to blues and rock than the lighter Methenyesque jazz and World music vibes of recent times. I also saw him live at the Town and Country Club in 1989, a memorable gig featuring the mind-blowing Dennis Chambers on drums.

Further reading: ‘The Extraordinary And Tragic Life Of Jaco Pastorius’ by Bill Milkowski