‘A game of two halves’ is a common expression in football, but it can apply to albums too.

We all know albums which have one good side and one bad one (I’ll throw in The Seeds Of Love, Fulfingness’ First Finale, Music Of My Mind, The Colour Of Spring for your consideration…).

The Cult Of Metheny has ensnared many, and puzzled just as many. But As Falls Wichita fell smack bang in my favourite era of Pat’s music (between American Garage and Song X), and represented a real change of scene.

‘As Falls Wichita’ may be the most ‘rock’ music released on the ECM label during the 1980s, with the possible exception of David Torn’s 1987 record Cloud About Mercury. It also seems dangerously ambitious. Then again, the whole album was recorded in just three days! Lesser musicians could have taken a month to record this track alone.

The track plays out like a good movie (its working title was ‘Apocalypse When’). It’s more John Carpenter than Keith Jarrett. You might even describe it as cathartic, dammit.

(Another reason for its success may be the complete lack of instrumental solos. Pat doesn’t get any solo space at all – he just plays some unobtrusive bass, chiming 12-string electric and a little six-string. All sounds are textural and in the service of the whole piece.)

A superb live version was featured on the 1983 Metheny Group album Travels. And those who remember the Christian Dior ‘Fahrenheit’ adverts in the late 1980s may be familiar with a small excerpt of the track:

But back to that ‘album of two halves’ thing. Sadly, side two of As Falls Wichita is New-Age sludge. Ponderous and flabby, it’s fuel to Pat detractors, but probably loved by acolytes.

‘September Fifteenth’, a tribute to Bill Evans (named for the date of the great jazz pianist’s death in 1980) is the chief culprit. A closing, out-of-tune version of ‘Amazing Grace’ doesn’t help. It’s music for tired Apple executives, and sounds like it was recorded in the last afternoon of the three days.

But As Falls Wichita was an unexpected smash by ‘jazz’ standards: the album got to #1 on the Billboard Jazz Charts and quickly became Metheny’s biggest seller to date.

So happy 40th birthday to the classic title track. Pour yourself something tall, tune in, drop out, get the headphones on, lie on the floor and crank it up. It’s a trip, man…

Despite his many stylistic detours, Pat Metheny is a brand all right, and his music inspires a devotion and attendant sales profile that has rarely – if ever – been afforded to ‘jazz’ musicians.

If you – like me – aren’t always enamoured by the bulletproof sincerity of his stage presentation (in Gary Giddins’ memorable words, he ‘intones plush melodies with excessive sobriety, as though the notes were transmitted directly from God’ – the main reason why I’ve always preferred his stuff on record rather than live…), it’s beyond doubt that Metheny is one of the great guitar soloists.

Mervyn Cooke’s superb new book ‘Pat Metheny: The ECM Years, 1975-1984′ sheds light on the first – and, for me, best – decade of the guitarist’s recording career, when he was the famous European jazz label’s top turn.

There are fascinating details, like Metheny’s obsession with flat ride cymbals (hence his deliberate placement of drummers onstage, ride cymbals always in close proximity to his left ear) and his singular band-leading philosophies. There are solo transcriptions and quotes from archive interviews.

Cooke also shrewdly compares Metheny’s studio work in this era to that of Weather Report’s, drawing parallels between both acts’ meticulous sculpting of ‘spontaneous’ musical performances and attempts to concoct ‘through-composed’ – rather than vamp-based – material. 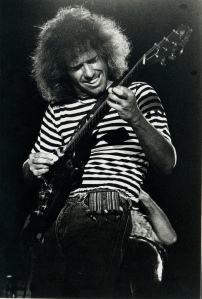 Metheny fans will love ‘The ECM Years’, as will anyone who has even the faintest interest in guitar trends of the last 40 years. It also serves as a rich biography of ECM Records in its early years, with numerous revelations about label boss Manfred Eicher.

Revisiting As Falls Wichita in particular has been somewhat of a revelation. (Prog fans: check out side one. It’s a cinematic masterpiece, analysed in great detail by Cooke.)