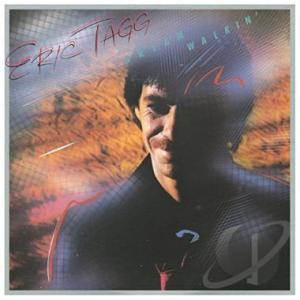 I still haven’t done the West Coast drive between LA and San Fran, but I know which music I’ll have on in the Pontiac Firebird when I do: it’s a toss-up between Steely Dan and Eric Tagg.

Probably best known for his work with guitarist Lee Ritenour on the Rit and Rit 2 albums, Tagg possesses a soulful, velvety voice, pitched somewhere between Stevie Wonder and Donald Fagen (some have also drawn comparisons to David Pack and George Michael). To these ears, his compositions also sound superior to a lot of similar material.

He released three solo albums in the ’70s/early ’80s, the best of which (Dreamwalkin’) was produced by Ritenour. Tagg was born in Chicago but spent his formative musical years in Holland singing with Dutch bands Rainbow Train and Beehive.

Gravitating to Los Angeles in the mid-’70s, he embarked on a solo career and joined Ritenour for their successful double act. But over the last 30 years he’s slowly retreated from public life, mainly devoting himself to writing Christian songs from his Texas base.

Let’s go back to that golden time for West Coast music, the early ’80s, and focus on six of Eric’s best from the era.

Released as a single under Lee Ritenour’s name in April 1981, it reached the dizzy heights of #15 on the US pop charts. A classic slow jam with one of the best middle-eights of the ’80s.

Funky bit of pop/soul with Bill Champlin on back-ups. Wouldn’t have sounded out of place on The Dude or even Thriller.

A classic drum performance from Jeff Porcaro on another single from Rit.

This gorgeous slice of pop/soul, with a winning set of chord changes in the verse, was recently covered (pretty well) by US neo-soul crooner Eric Roberson.

Another richly-chorded delight with more than a hint of ‘My Cherie Amour’ about it. Sublime keyboard work from David Foster, some classic Lee rhythm guitar and a great arrangement.

Sequels are seldom a good idea in the movie business, and thankfully they’re a lot less prevalent in the music game.

But one of the most successful ‘franchises’ of the ’80s was guitarist Lee Ritenour’s Rit/Rit 2 combo, now re-released by Cherry Red on a single CD, and they’re two of the best-sounding albums of the era.

Of course that shouldn’t be a huge surprise when you notice the presence of names such as Humberto Gatica, David Foster, Harvey Mason, Jeff Porcaro, Jerry Hey, Abe Laboriel, Alex Acuna and Greg Philinganes on the song credits, but then again a lot of albums at that time featured all the right ‘names’ but didn’t deliver the goods. 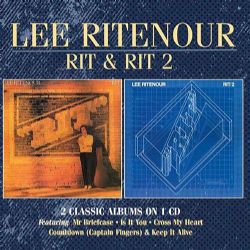 But if 1982’s Rit 2 is not quite in the same league as its predecessor, it’s still another classic piece of sumptuously-produced, blissed-out West Coast AOR with touches of jazz and soul, helped by the excellent vocals, keyboards and songwriting of Eric Tagg.

To these ears, it sounds as if Quincy Jones had produced Toto and got a good singer and a few decent songwriters in.’Promises Promises’ is superior disco/funk/rock and wouldn’t sound out of place on Quincy’s The Dude or Jacko’s Thriller.

‘Dreamwalkin’ is kind of the ‘happy’ version of Earth Wind & Fire’s ‘After The Love Has Gone’ and would make a great theme song for a an early-’80s, California-set Chevy Chase/Goldie Hawn vehicle. Ditto ‘Keep It Alive’.

‘Tied Up’ and ‘Voices’ initially seem like standard AOR fare, but reveal their superiority with interesting, layered vocal arrangements and surprising chord changes (and a classic bit of Porcaro drums on the latter). But the real standout is killer instrumental ‘Road Runner’ featuring Harvey Mason’s incredibly intricate hi-hat work, a spicy Jerry Hey horn arrangement, some tasty Fender Rhodes from Philinganes and a corking set of solos from Ritenour.

Ritenour tried to repeat the formula on ’84’s less successful Banded Together before embarking on a decade of underwhelming instrumental smooth jazz with the occasional high point. But Rit and Rit 2 are classics of their kind and belong alongside Steely’s Gaucho, Randy Crawford’s Secret Combination, Quincy’s The Dude, Michael Jackson’s Thriller and George Benson’s Give Me The Night as key albums of the era.

Is there a more wretched style of music than smooth jazz? We all know it when we hear it; there’s a good bet it will feature an insipid melody, usually played on soprano sax or clean-toned guitar, a dollop of white-man’s-overbite funk and usually a side order of cheesy slap bass too.

When the intricate, interesting jazz/rock played by the likes of Weather Report, Steps Ahead, Miles Davis and John McLaughlin started tanking in the mid-’80s, artists such as Bob James, The Rippingtons and Spyro Gyra took the classic fusion sound, sweetened it, added touches of light gospel and soul and repackaged it as yuppiefied, post-Windham Hill chill-out music, jazz for people who hate jazz. And they made a killing.

But a different kind of ‘smooth jazz’ had emerged a decade before, in the late ’70s and early ’80s, a mixture of AOR, jazz harmony, classic fusion and Yacht Rock. It was the soundtrack for driving West on Sunset, decadent, expensive-sounding music full of dreamy Fender Rhodes playing and tasty grooves. 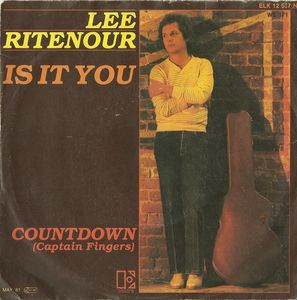 The unofficial headquarters of the sound was The Baked Potato, a nightclub in Studio City, LA, and one of the key musicians was guitarist Lee Ritenour (ironically one of the figureheads of the late-’80s Smooth Jazz scene proper).

His 1981 album Rit is a classic of its kind alongside George Benson’s Give Me The Night, Larry Carlton’s Friends, David Sanborn’s Hideaway, Casino Lights, Randy Crawford’s Secret Combination and Steely’s Gaucho.

This sort of music was America when I was 13 or 14. In my daydreams, I was scooting along the West Coast in a Pontiac, top down, loud music playing, palm trees – you know the drill. Had I been watching too much ‘Knight Rider’ and ‘Moonlighting’ and listening to too much Steely Dan? Quite possibly…

Although early Ritenour albums had been tricksy fusion, more in line with what George Duke or Alphonso Johnson were doing, Rit saw him concentrate on collaborations with gifted Stevie-meets-Fagen vocalist/songwriter Eric Tagg. To this writer’s ears, George Michael very definitely checked out Mr Tagg. The track ‘Is It You’ got to number 15 in the singles charts and features one of the great middle-eights of the era:

Drum fans will enjoy Rit too; the great Jeff Porcaro plays a blinding shuffle on ‘Mr Briefcase’ (another pop hit from the album) and produces a classic rock performance on ‘Good Question’. According to Wikipedia, MTV broadcast the videos of ‘Mr Briefcase’ and ‘Is It You’ during its first day on air (1st August 1981)!

When things get too mellow, Ritenour always seems to know when to insert a spicy solo (in the days when he delivered high-octane jazz/rock playing a la Santana or Larry Carlton). The instrumentals are an appealing mixture of early ’80s technology (Linn LM-1 abundant) and the sparky funk of Abe Laboriel’s bass playing and Don Grusin’s soulful Fender Rhodes. And Jerry Hey’s horn arrangements are instantly recognisable and a great addition.

I don’t think it’s an exaggeration to say that Rit was an influence on Thriller (compare Rit’s ‘Just Tell Me Pretty Lies‘ with Jacko’s ‘Baby Be Mine’) and various other Quincy productions later in the decade.

In 1982, Ritenour released the sequel Rit 2, which was almost as good and contained the superb ‘Roadrunner’. These are a couple of albums well worth revisiting.