How many British songwriters have made their living exclusively in soul/funk/R’n’B? If you can come up with more than one name, you’re doing pretty well…

It shows just how singular and important Rod Temperton’s career was until cut short by his death in 2016. Though never ‘flavour of the month’ (i.e. not ‘rock’), he has to be in the pantheon of great songwriters, Brit or otherwise.

Jed Pitman is first out of the traps with a biography of the Cleethorpes-born melody maestro who came out of the somewhat unprepossessing mid-’70s Midlands soul scene to somehow write (or co-write) ‘Thriller’, ‘Rock With You’, ‘Sweet Freedom’, ‘Give Me The Night’, ‘The Dude’, ‘Love Is In Control (Finger On The Trigger)’, ‘Ya Mo Be There’, ‘Love X Love’, ‘Always And Forever’, ‘The Lady In My Life’, ‘Razzamatazz’ and ‘Boogie Nights’.

Pitman’s book evolved from a BBC radio programme and as such does at times feel somewhat like a transcription, with lots of verbatim interview material but fairly limited authorial insight. But that’s nitpicking when one considers his interviewees: Quincy Jones, Siedah Garrett, Michael McDonald, Herbie Hancock, Bob James, Bruce Swedien. The only major absentee seems to be Michael Jackson.

It has to be said, the constant theme of these interviews is: I can’t believe Rod wasn’t black. But once he’s got over that elephant in the room, Pitman builds up a more vivid picture of this rather geeky guy writing his funky, hook-laden tunes on a cheap keyboard in the weird town of Worms, Germany.

The groundbreaking disco/funk band Heatwave were of course the first recipients of his signature tunes, but the book’s great success is forging a line through all of Temperton’s work, identifying common traits and signposts. All those little synth and vocal motifs were clearly planned well in advance – it’s also clear that he worked from the bassline up. And what fabulous, much-sampled basslines they were. Even Public Enemy nicked from Heatwave’s brilliant ‘The Groove Line’ for their ‘Sophisticated B**ch‘.

The other really pleasing aspect of ‘The Invisible Man’ is discovering some of the more obscure avenues of Temperton’s career – collaborations with Herbie Hancock and Bob James, ‘The Color Purple’ soundtrack, ‘The Oprah Winfrey Show’ theme music. The book also places a lot more emphasis on his arranging work than is commonly known.

But we never quite work out what makes Temperton tick musically. Who were his main influences? The anecdotes seldom go beyond: ‘He was the real deal’. And Pitman rather glosses over the leaner last 20 years of his career – it would have been interesting to find out more about his view on the more technology-led/minimalist R’n’B of recent years.

But on the whole this is an extremely readable, valuable book, and the world is a better place for it. It certainly had me scurrying to various streaming services to check out everything in Rod’s illustrious songbook. The Heatwave albums, in particular, have been a revelation. (Incidentally, the cover of ‘The Invisible Man’ is pretty ghastly but apparently a very accurate portrayal – almost every interviewee speaks of his obsession with the cigs…)

‘The Invisible Man’ is published now by The History Press. 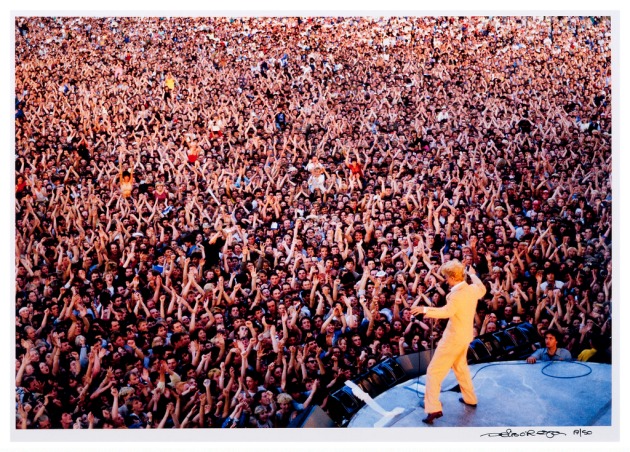 The current London heatwave has sent me back to the summer of 1983 when it seemed like the sun shone every day and the radio was set to ‘fun’, blurting Men At Work, Thompson Twins, Kid Creole, KC and the Sunshine Band, Dexys Midnight Runners and Culture Club. 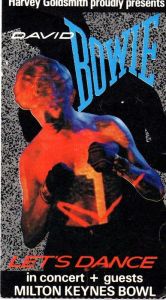 But Bowiemania trumped them all. In July ’83, all my parents’ friends were dancing to Let’s Dance and David’s Serious (or should that be Sirius?) Moonlight Tour was the hottest ticket in town.

Apologies to Milton Keynes natives, but Londoners of a certain generation will probably always suppress a titter at the mention of the new town’s name (The Style Council didn’t help with their satirical 1984 single).

Maybe Bowie tittered a bit too when three Milton Keynes Bowl dates (1st/2nd/3rd July 1983) were swiftly added to the tour due to unprecedented demand in the London area (he had already done a night at Wembley Arena and a charity show at the Hammersmith Odeon). But the gigs were a huge success, and Denis O’Regan’s photo marking the occasion is surely one of the great ’80s music documents.

According to O’Regan, who had unparalleled access to Bowie and his entourage throughout the world tour, David had never been happier: ‘He talked about it being his Phil Collins period but this was heavily in retrospect. At the time, I know he loved it. It was the happiest and most successful he’d ever been’, O’Regan recently told MOJO magazine. Bowie was also making a bit of money at last, freed from dodgy record and management deals.

But he wouldn’t have been the great artist he was without injecting some spikiness into even his most ‘up’ periods: see the ‘Let’s Dance’ and ‘China Girl’ videos, ‘Merry Christmas Mr Lawrence’ and also the below interview, where he takes MTV to task for not playing more black artists.

I haven’t kept many VHS cassettes: ‘Steve Martin Live’, Japan’s ‘Oil On Canvas’ and King Crimson’s ‘The Noise’ are probably lurking around somewhere, and two vids that definitely won’t be hitting the charity shop any time soon are Prince’s ‘Lovesexy Live: Volumes 1 and 2’ (still unavailable on DVD…).

The Lovesexy tour kicked off 30 years ago this week, on 8th July 1988 at Paris’s Palais Omnisport. The seven-month jaunt, taking in Europe, North America and Japan, was arguably Prince’s greatest ever.

A spectacular in-the-round stage set was designed as a kind of ‘fantasy island’, half a playground and half a dreamscape, with curtains, a mini basketball court, brass bed, swing set and a Ford T-Bird which Prince ‘drove’ around the stage at the start of the show.

Taped on the last night of the European tour – 9th September 1988, at the Westfalenhalle in Dortmund, Germany – ‘Lovesexy Live’ still makes for a thrilling watch. First, the music: this band could turn on a dime. It’s hard to imagine any other set of musicians from the era pulling off the ‘Adore’/’Jack U Off’/’Sister’ medley. Prince’s guitar playing is at its best, with creamy, delay-drenched distortion and tight, tasty Telecaster.

And of all the ’80s ‘pop’ acts who incorporated jazz into their work, Prince may be the most successful. In collaboration with his superb horn section (Eric Leeds on saxes, Matt Blistan on trumpet), he often went back to the source: Ellington’s ‘Things Ain’t What They Used To Be’ and Charlie Parker’s ‘Billie’s Bounce’ infiltrate ‘Blues In C/If I Had A Harem’, and Blistan occasionally quotes from ‘It Don’t Mean A Thing (If It Ain’t Got That Swing’). Meanwhile Sheila E brings the Bay Area jazz/rock sound so beloved of Prince. Her solo feature is a highlight of his ’80s live work.

Then there’s the ‘story’. The Lovesexy show is structured like one of those old Warner Bros gangster pictures – in the first half (lucky for us), we see an ‘evil’ Prince, seduced by the sins of the flesh and tempted by drugs, money and criminality, giving him an excuse to dust off Black Album standouts ‘Superfunkicalifragisexy’ and ‘Bob George’.

Then there’s punishment, atonement and spiritual conversion. Yes, y’all, the second half of the show is ‘God stuff’. But if you don’t go along with it, the music is enough of a spiritual experience anyway. Anyway, Prince certainly seems genuinely transported during ‘Anna Stesia’ and ‘I Wish U Heaven’.

Europe couldn’t get enough of the tour. There were no less than seven nights at London’s Wembley Arena and a series of famous after-show gigs, particularly at the Camden Palace on 25th July when Mica Paris was picked out from the crowd to sing ‘Just My Imagination’ and Ron Wood joined Prince onstage for a memorable ‘Miss You’ (see below).

Ticket sales were not so good in the States (14th September to 29th November) where apparently Prince struggled to sell out many arenas, despite it being his first major tour there for over three years. But normal service was resumed when the Japan leg kicked off in early February 1989. The last night of the tour on the 13th was apparently an exceptionally emotional one.

When Prince got home to Minneapolis, he commenced work on the ‘Batman’ soundtrack, another project about the duality of man. It’s not hard to see where his head was at as the ’80s drew to a close.

Mark King tearing it up

What’s it like seeing ‘your’ band play at a big festival, when only a small proportion of the crowd are fans and most would rather have a chin-wag and quaff cider than listen to the music? Will your band win them over, or at least give a good account of themselves?

It was an interesting experience watching Level 42 under those circumstances last weekend. The Love Supreme Festival was celebrating its fifth birthday, no mean feat for an outdoor ‘jazz’ festival, thriving in a niche marketplace by focusing on the improvising musicians of tomorrow, established genre names and crossover artists whose presence no doubt raises some eyebrows (the other main-stage headliners this year were Earth Wind & Fire, George Clinton and Elvis Costello).

A big festival gig should, on the face of it, be a doddle for a band with as many hits and as much musical credibility as Mark King and his muckers – you knock off a lean, mean hour and get the crowd saying: ‘I’d forgotten about this one!’. But they did it the hard way this time, kicking off with nobody’s favourite Level 42 song ‘Heaven In My Hands’ then segueing speedily into ‘Dream Crazy’, ‘To Be With You Again’ and ‘It’s Over’. 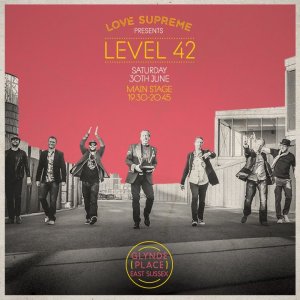 A superb ‘Children Say’, complete with a reference to Coltrane’s ‘A Love Supreme’, got things back on track musically but also seemed lost on the crowd. King was unsettled. Had he blown it? No. He soldiered on, making some cracks about the World Cup and the Alan Shearer lookalike on trumpet, before ‘Running In The Family’ prompted an outbreak of interpretative dancing from the Brighton teenagers.

Secret weapon Mike Lindup sounded in superb voice during ‘Lessons In Love’, ‘Something About You’ and ‘Hot Water’, but, predictably, it was the classic jazz/funk/fusion-era material that gained most traction: ‘Starchild’, ‘Love Games’ and a never-groovier ‘Sun Goes Down (Living It Up)’. Suddenly the crowd and gig came to life. There could have been much more in that vein. Where was ‘Almost There’, ‘Micro Kid’, ‘Turn It On’, ‘The Chinese Way’, even ’43’, ‘Mr Pink’ or ‘Heathrow’?

But when the material was right, the band sounded superb. King’s voice may be past its best but his bass skills have reached new heights. The slapping sometimes lacked precision but his fingerstyle playing goes from strength to strength. He embellished ‘Children Say’, ‘Starchild’ and ‘Sun Goes Down’ with some outstanding modal moves. There’s life in the Isle Of Wight lad yet.