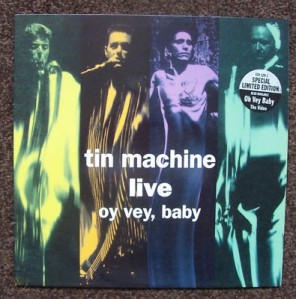 I wasn’t sure I was going to write about this but Bowie came to me in a dream a few days ago and said I must! I’m under orders…

30 years ago this month, on 17 February 1992, Tin Machine played their last ever gig at the NHK Hall in Tokyo. It was the final date of the ‘It’s My Life’ tour.

It had been a period of ups and downs – ups in late October 1991 when Bowie proposed to Iman Abdulmajid in Paris, downs due to the drug problems of one band member (with the initials HS).

Some people never ‘forgave’ Bowie for TM but for many others the band represented his ’80s rehabilitation. I was fascinated from the get-go and for my money it spawned a fair share of classic David (sometimes co-written with Reeves Gabrels) songs: ‘I Can’t Read’, ‘Under The God’, ‘Amazing’, ‘Baby Universal’, ‘You Belong In Rock’n’Roll’, ‘Amlapura’, ‘Shopping For Girls’, ‘Goodbye Mr Ed’. 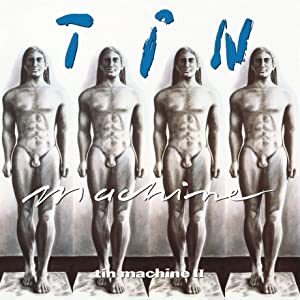 And it’s doubtful we would have got that brilliant Buddha Of Suburbia/1. Outside/Earthling triptych without TM.

Bowie agreed: ‘Once I had done Tin Machine, nobody could see me any more which was the best thing that ever happened, because I was back using all the artistic pieces that I needed to survive and imbuing myself with the passion that I had in the late seventies.’

True to his word, the band lasted three albums, though Bowie hinted it may have gone on longer had drug problems not reared their ugly heads. But it’s still hard to get hold of the last two records (Tin Machine II, Oy Vey Baby).

Here’s the second, penultimate night at the NHK on 6 February 1992. The sound quality is superb, though the audio cuts out completely around 45 minutes in and doesn’t return.

Gabrels sounds great, Bowie (sporting a ‘Rock Against Racism’ T-shirt) does too and there are some nice bits of ‘amateurism’ including several fudged song openings (Bowie’s guitar tech has very kindly turned down the volume of his 12-string before the start of the gig!). Some of this material was used for the final album Oy Vey Baby. 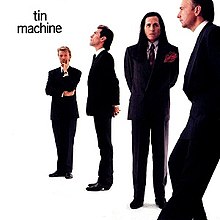 This week marks 30 years since Tin Machine wrapped up their first year of activity with a low-key gig at Moby Dick’s in Sydney, Australia on 4 November 1989.

In the previous 12 months, they’d recorded and released their first album, written and recorded most of the second album, and toured extensively.

Any true Bowie fan must surely like elements of Tin Machine, or at least appreciate the career-reviving value of the band. After all, he was reportedly seriously considering giving up music at the beginning of 1988.

My muso college mates and I had an instant kinship with Tin Machine, particularly picking up on the Jeff Beck and Hendrix influences. Never Let Me Down had completely passed me by, but this felt instinctively like the natural followup to Scary Monsters.

Bowie first hooked up with guitarist Reeves Gabrels, whose wife Sarah had been a press officer on the US leg of his ‘Glass Spider’ tour. But who should join them on bass and drums?

There were mentions of Percy Jones and Terry Bozzio, but they settled on the street-tough Sales brothers, of course previously known to Bowie as the rhythm section on Iggy’s Lust For Life.

Bowie realised what he had signed up for when drummer Hunt apparently strode into the first rehearsal wearing a ‘F*ck You I’m From Texas’ T-shirt.

One of the first things the assembled unit apparently did was make a list of the artists that would inform and influence the band’s sound: Neil Young, The Pixies, Cream, John Coltrane, Sonic Youth, Glenn Branca, Bo Diddley, Sex Pistols, John Lee Hooker, John Lennon.

The debut album was recorded quickly (producer Tim Palmer was apparently barely able to get a decent sound before he realised they were in the middle of a take) and released on 22 May 1989.

How does it sound these days? Pretty damn good. Bowie’s singing is as committed as at any time in his career, and the material is sometimes electrifying.

The Mission/Cult helmer Palmer brings cavernous drums and great guitar layering, finding a most willing participant in Gabrels; ‘Pretty Thing’ in particular delivers a huge wall of sound. Palmer discusses the making of the album in this excellent interview.

Hunt Sales: a rock drummer who swings. He goes double-time if he feels like it.  He slows down, he speeds up. You can’t teach this stuff. The music breathes. Gabrels plays brilliantly, consistently coming on like a cross between Adrian Belew and Robert Fripp, but with more of a blues attitude.

Back in 1989, it was also absolutely fascinating watching Bowie sublimate himself into a band situation, albeit very ‘artfully’ (one of Gabrels’ proposals for a band name was The Emperor’s New Clothes).

He was instructed by the Sales brothers not to over-think his lyrics, but rather to lean on his first instincts. Consequently a few tracks aren’t going to win any #MeToo awards but they’re an honest, unfettered portrayal of middle-aged male lust. And why not?

But those tracks are balanced by the tender ‘Amazing’ and politically-charged ‘Crack City’, ‘Video Crimes’ and ‘Under The God’. It’s invigorating hearing David eschewing irony and nihilism in favour of passionate commitment, though he dusts off the old ennui for the brilliant ‘I Can’t Read’.

The album is 20 minutes too long. If it had been shorn of the dire ‘Working Class Hero’, deafening ‘Baby Can Dance’, dreary ‘Bus Stop’, turgid ‘Run’ and silly ‘Sacrifice Yourself’, I’d put Tin Machine up there with Scary Monsters as Bowie’s last great rock album.

It’s also largely forgotten that it was a critical and commercial success, reaching #3 in the UK, selling a million copies and making many writers’ albums of the year. Hilariously, it also made the Melody Maker’s Worst Ever Albums top 20 list in 1998.

Weirdly, Bowie bounced straight into announcing his own solo ‘greatest hits’ tour in December 1989, ostensibly to promote the excellent series of Rykodisc CD reissues which had kicked off with the Sound + Vision box set.

Quite what his TM bandmates thought of this state of affairs isn’t documented, though Gabrels declined to play guitar on the ‘Sound + Vision’ tour (Belew accepted). Gabrels went off to guest on The Mission’s Carved In Sand instead.