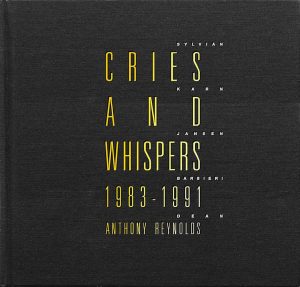 Which ‘rock’ artists are the most likely to be subjects of not one but a series of biographies? The Beatles, The Stones, Dylan?

Japan are possibly unlikely recipients of such a legacy, but Anthony Reynolds’ superb new ‘Cries And Whispers’ – carrying on from where ‘A Foreign Place’ left off – holds the attention with ease.

His luxuriously-appointed new book takes an indepth look at all the protagonists’ (Sylvian, Steve Jansen, Mick Karn, Richard Barbieri) careers between 1983 and 1991, a mouth-watering prospect when you realise how scant the serious coverage of these groundbreaking musicians really is, Martin Power’s half-decent 1998 biography of Sylvian aside.

Here you get rigorous research, rare photos and unexpectedly candid interviews from producers, engineers, designers, record company execs, hangers-on and of course the musicians themselves.

There are fascinating glimpses under the ’80s pop bonnet, with details of record company correspondence, press releases, tour itineraries/diaries and testimonies from session players.

In the main, Reynolds wisely keeps musical analysis to a minimum, letting the facts and musicians speak for themselves, and he also – admirably – is as interested in the murkier corners of Sylvian’s ’80s work (the one-off ‘Pop Song’ single, his involvement with Propaganda’s A Secret Wish album) as he is with the better-known stuff.

Indeed, all the chapters on Sylvian’s solo work are terrific, particularly the lengthy portrait of his punishing ‘In Praise Of Shamans’ 1988 world tour. The Rain Tree Crow section is also gripping.

There are minor gripes here and there: some quotes from relatively peripheral figures – clearly cut and pasted from email correspondence – could do with trimming, and does anyone really want such a lengthy analysis of Dalis Car or The Dolphin Brothers? But even these longeurs have their fascinating moments.

This writer almost read ‘Cries And Whispers’ in one sitting, passing it from desk to sofa to dinner table to bath to bed, and you may well do the same. It’s another fine achievement by Reynolds and another classic music book to boot. We eagerly await the next instalment.

‘Cries And Whispers’ is published by Burning Shed.

Ringo Starr was once asked: What do you remember about recording Sgt Pepper’s? His reply? ‘I learnt how to play chess on that album.’

Not to do Ringo down at all – he’s the reason this writer picked up the drum sticks – but the line does say something about the sometimes tedious nature of recording in the era of multi-tracking.

The drummer may have laid down all his parts in the first week of a project, so he or she had better have a Plan B for when the rest of the band are tinkering endlessly. 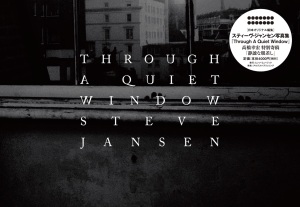 Japan drummer Steve Jansen didn’t learn chess but he did use his time very productively while the band recorded their masterpieces, Gentlemen Take Polaroids and Tin Drum; he developed his formidable photography skills, and now his work has been collected in a sumptuously-designed hardback book ‘Through A Quiet Window’.

To say that it will appease Japan fans is a total understatement – it makes a brilliant companion piece to Anthony Reynolds’ excellent recent biography ‘A Foreign Place’, and brings the band’s relatively short but very eventful story to life.

We see portraits of the band in all kinds of different locations, mainly between 1979 and 1981: Mick Karn laying down his bass parts at AIR Studios and mooching about Holland Park in West London; David Sylvian lounging in various hotel rooms and recording studios including the Townhouse and the Manor, Richard Barbieri sitting stone-faced at his keyboard or smirking on the tour bus.

There is also a memorably candid shot of Karn and Sylvian at the breakfast table in their Stanhope Gardens flat. We also see fleeting glimpses of producers Steve Nye and John Porter at various mixing desks, often flanked by either Karn or Sylvian.

While there are a lot of laughs about, the overall impression is of a very insular bunch of guys, extremely dedicated to their music but also their friendships. No real surprise there, then, but the intimate nature of many photos is very refreshing.

Steve Jansen demonstrates the same precision and natural sense of timing behind the camera as he always does behind the kit. And there are some cracking hairstyles on show too. Highly recommended.

‘Through A Quiet Window’ is available from Artes Publishing.