All music fans love a theory.

And what with all this talk of Q’s sad demise, movingtheriver has been ruminating on the magazine’s great articles past, including an interview with Brett Anderson in which the Suede head honcho posited his theory that track seven of an album is always the best track.

This was red rag to a bull for movingtheriver. But was Brett on to something? Or does he just have some kind of weird, ritualistic interest in the number seven? In a world exclusive, we investigate some movingtheriver-approved, ‘critic-proof’ albums of the 1980s to test his theory.

In the words of Ian Dury, this is what we find…

So how do the track sevens stack up? It has to be said, most do seem to have something ‘Suede-like’ about them, something wistful, melancholic, or, in the case of the Talking Heads, Human League and Kate Bush tracks, positively menacing. Brett would probably approve.

But are they the ‘best’ tracks from their respective albums? No. You could possibly make a case for ‘Human Nature’ and ‘Saturday Night’* but you’d certainly be going out on a limb.

So there you have it. Obviously Mr A was talking out of his a*se. Next time: Peter Andrex’s ‘track four’ theory. B*llshit or not? YOU be the judge… 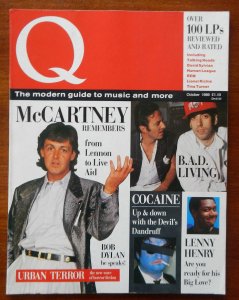 Another one bites the dust: a succinct tweet from editor Ted Kessler spawning many emotional replies from scribes of all stripes, and it’s au revoir to one of the most respected music mags of the last 40 years.

Yes, the September issue will be the very last edition of Q. I was surprised how peturbed I was by this news. Without Q in the world, something is amiss.

I guess my dad, broad-minded and well-read music fan that he was, would have bought the very first Macca-adorned edition in October 1986, but I took the baton from there and got every issue (unless Robbie Williams or Noel Gallagher were on the cover) until the late 1990s.

There was a major cull in the early 2000s when I chucked quite a few out, and I have about 30 left. Of course now I wish I had kept them all.

Why did I stop buying Q every month? It was probably the general state of the late-1990s music scene rather than the writing, though I also missed the humour of the David Hepworth/Mark Ellen/Tom Hibbert troika which was the driving force in the early years. But I kept my hand in right until the end, recalling a brilliant recent issue featuring Suggs, Suede, Status Quo and Mark E Smith.

Q was initially a perfect alternative to the NME and Melody Maker, a post-Live Aid, CD-age rag designed to cater to the ‘older’ rock/pop fan but actually delivering something subtly subversive. It foregrounded extended interviews without any PR puffery, and added some much-needed humour and p*ss-taking of the burgeoning celebrity culture.

If you were a bit of a ‘muso’ like me, you got used to ‘your’ band generally getting a critical mauling, but I also discovered some great music via the mag’s review section (David Torn, Bireli Lagrene, Lewis Taylor, Spacek, Love And Money, Danny Wilson, John Abercrombie).

Lots of features stick in the mind – of course Tom Hibbert’s Who The Hell? and the much-imitated Cash For Questions. And there were loads of memorable interviews: a post-toiletgate George Michael, Bob Geldof jostling with Sting, Macca talking candidly about drugs and Lennon for the first time, Jonathan Richman, Shirley Manson, Madonna in her ‘Blond Ambition’ pomp, Prince during the ‘Slave’ era, Joni Mitchell circa Chalk Mark In A Rainstorm, the Television reunion, JJ Cale, Bowie’s Cash For Questions, Green Gartside in his local East End boozer. And there were also the brilliant 10th anniversary and 100th issues.

The PR boom that had swept the music business in the 1970s really hit its stride in the 1980s. MTV launched on August 1st 1981 and ensured that artists’ images were just as important as the musical package. In fact, a good image and strong video could sell an artist all over the world without any need to play live.

At the same time, the tabloid press had cottoned on to the power of music biz celebrity; columns like Bizarre and The 3am Girls, both of which featured in The Sun newspaper, were huge successes and reiterated that the public’s appetite for showbiz stories knew no bounds. PR and tabloid journalism were in their heyday, and they could make or break a career.

So thank goodness there was a writer like Tom Hibbert around. He cut through the PR schtick and exposed the chancers, pretenders and prima donnas of the ’80s for what they were, and in the process wrote some of the most pithy and hilarious music articles of all time.

With his shoulder-length hair, ever-present fag/pint, disarmingly faux-naif style and penchant for obscure psych bands, he was always going to be more comfortable in the late-’60s than the preening mid-’80s (apparently he only really rated Iggy Pop, Jerry Garcia, Syd Barrett and Ray Davies from the ‘pop’ world).

Later, with his work on Smash Hits and particularly Q Magazine, he invented a whole new, much-imitated lexicon of music journalism. He would begin pieces with expressions like: ‘Phew, rock’n’roll, eh, readers?’ David Bowie was rechristened as The Dame, Cliff as Sir Clifford Of Richard, Paul McCartney as Fab Macca Wacky Thumbs Aloft and Freddie Mercury as Lord Frederick Lucan Of Mercury.

The gentle p*ss-taking was quite a change from the reverential Melody Maker/Sounds era. When commissioned to write a biography of Billy Joel, Hibbert apparently wrote most of it about Joel’s almost totally unknown psych band, The Hassles, and dismissed the rest of his career in the final chapter!*

Tom hit his stride writing the notorious ‘Who The Hell Do They Think They Are’ articles in Q which generally exposed and belittled the more gullible, self-important celebs of the ’80s, usually from the world of music. He was given a right bollocking by Jerry Lee Lewis after one too many questions about The Killer’s rivalry with Elvis:

‘Don’t nit-pick me, boy! You mention Elvis to me again, you keep digging me about that and I’m gonna kill you, so help me God!’

He pulled off a similar trick with Ringo, ignoring instructions from the PR and asking repeated questions about The Beatles. Mr Starkey could contain himself no longer, bawling:

He flew to Brazil and tracked down notorious train robber/friend of the Sex Pistols Ronnie Biggs, and – perhaps predictably – got along quite well with him.

At the height of Q’s popularity in 1987, Tom was given the dream gig: an audience with Thatcher. She obviously thought this would be a golden chance to woo the nation’s ‘youth’ but came nicely unstuck when she gleefully revealed that her favourite singer was Cliff and favourite song ‘(How Much Is) That Doggie In The Window’. You can read the interview here. 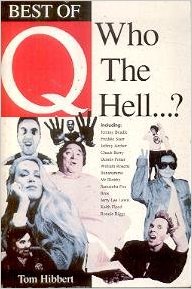 Tom also interviewed actor Rupert Everett in 1987, at a time when the thespian was trying to reposition himself as a credible pop singer. Hibbert’s preamble to the interview ran thus:

He wears the soiled leather jacket and the shades (on this drab and rainy day) of the rock star, but his attempt at the street-damaged look is foiled somewhat by the poise and delivery of the effete and English ac-tor. Close your eyes as he talks and you might imagine him to be dressed in a velveteen smoking jacket, and that it were a delicate ebony cigarette holder he was chewing on rather than a lettuce and tomato sandwich…

Later interviews with Status Quo, Boy George, Roger Waters, Television and Jonathan Richman make me chuckle to this day, and some of them are in this collection.

Son of esteemed historian Christopher Hibbert, Tom was born and brought up in Henley-on-Thames in Oxfordshire. His early career involved writing for home-improvement periodicals and playing guitar in a few unheralded bands. Sadly, Tom died in September 2011 at the age of just 59, his rather unhealthy lifestyle finally catching up with him. But as John Lydon told Tom during a Q interview in 1995, ‘You’re rather squalid, but I enjoy that. Ha-ha-ha-ha!’

*I need to verify that…