In the slipstream of Live Aid, when Stock, Aitken and Waterman ruled the charts, house and techno were warming up and ‘indie’ (Housemartins, Smiths, Cure) was thriving, this gifted pop/prog four-piece from Cumbria crept under the radar and even managed to secure a big hit with their second single ‘Calling All The Heroes’.

My mate Nige and I loved The Big Lad. The soundtrack to our after-school games of pool would either be Sting’s Bring On The Night or this, and I quickly grew to love its pristine production, challenging song structures, brilliant guitar playing and cool chord sequences.

As a teenager, I’d listen to it on my Walkman very loudly while studying David O’Connor’s superb, enigmatic cover art or reading Stephen King’s Christine… What larks.

Singer/guitarist Francis Dunnery once labelled The Big Lad ‘nutter’s music’, an apt description when you listen to songs like ‘Turn Me Loose’ and ‘I Got You’ which are almost pop but then pull the carpet from under your feet with bizarre, brilliant, extravagant middle sections and Dunnery’s off-mic vocal histrionics.

Producer Alan Shacklock – once the guitarist in Babe Ruth and future helmer of Chesney Hawkes’ ‘The One And Only’ – delivers a vibrant, state-of-the-’80s sound, with huge, gated drums and punchy bass.

It Bites’ early career as a souped-up pop covers band served them well – melody and groove are their priorities, and of course they were always a superb live act too.

Dunnery was (and is) also a very underrated Brit guitar hero whose playing could consistently deliver the sound of surprise with fluid legato, furious speed picking, dissonant intervals and whammy-bar abandon.

His solo on ‘You’ll Never Go To Heaven’ is a thrilling marriage of Allan Holdsworth and John McLaughlin and one of the great bits of over-the-top playing in Brit Rock.

He also delivered marvellously insane breaks on the Michael Jackson-meets-Duran Duran ‘Wanna Shout’ and barmy soft-rock ballad ‘Cold, Tired and Hungry’. Also worth checking out is B-side ‘Strange But True’ which, in its full version, becomes a vehicle for Dunnery’s increasingly demented solos.

It was their only big hit though; other singles ‘All In Red’ and ‘Whole New World’ were catchy pop tunes with interesting instrumental flourishes and inventive vocal harmonies but neither troubled the charts. 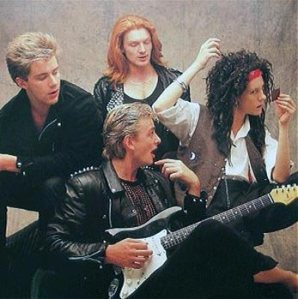 The music magazines of the time generally ignored It Bites. If they did get a mention, it was generally to mock their unfashionably-superb musicianship or lack of London street-cred.

I remember Dunnery making an emotional pre-song announcement onstage at a London Astoria gig in 1988 lambasting the ‘trendy’ music press.

The Big Lad wasn’t a huge hit but did just well enough, peaking at #35 in the UK. It Bites were up and running and their best was yet to come.

3 thoughts on “It Bites: The Big Lad In The Windmill”