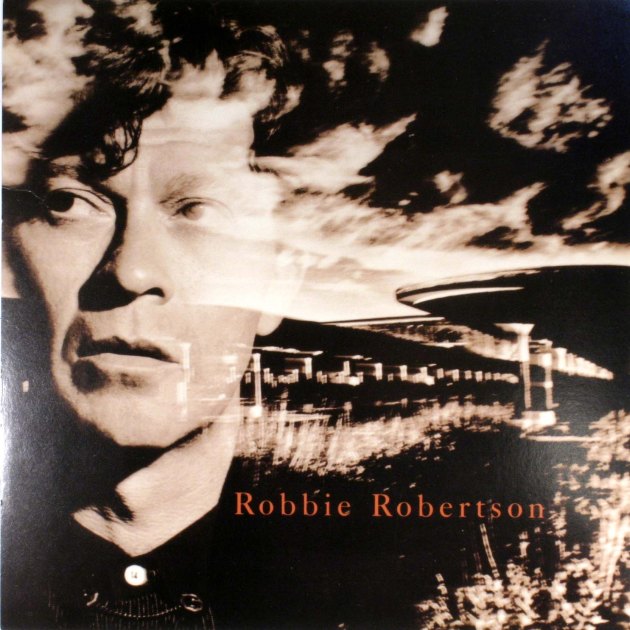 Robbie had a strange old ’80s. He began the decade acting alongside Jodie Foster in weirdo circus movie ‘Carny‘ before becoming Martin Scorsese’s best buddy and music consultant on ‘The King Of Comedy’ and ‘The Colour Of Money’. He ended it by making one of the best debut albums of the era – at 44 years old.

I didn’t have a clue about Robertson’s ‘mythical’ past as a founder member of counterculture heroes The Band when I first heard his superb ‘Somewhere Down The Crazy River’ single (which made #15 in the UK singles chart) in autumn 1987. But I was sold immediately. I think it was Robbie’s beguiling film-noir vocal, the delicious Manu Katche/Tony Levin rhythm section (check out Levin’s little countermelody in the song’s opening minute) and swirling Daniel Lanois ‘gaseous effect’ (as Q magazine memorably dubbed the Canadian’s production style). Certainly there were echoes of Peter Gabriel’s So.

Everywhere you look on Robbie Robertson there are modern classics. Gabriel himself supplies synth and vocals to the majestic opener ‘Fallen Angel’ (dedicated to Robertson’s former Band-mate Richard Manuel) and trademark Yamaha CP-300 piano to the anthemic ‘Broken Arrow’ (later covered – rather disastrously – by Rod Stewart). The superb ‘Sonny Got Caught In The Moonlight’ features yearning backing vocals from Band-mate Rick Danko.

‘American Roulette’ is a coruscating portrait of US celebrity culture; the first verse concerns James Dean, the second Elvis and the third Marilyn. There’s some top-class rhythm section work from Levin and drummer Terry Bozzio and intriguing keyboard playing from another ex-Bandmate Garth Hudson. ‘Showdown at Big Sky’ and harrowing, Vietnam-themed, almost Clash-like ‘Hell’s Half Acre’ rock hard but with enormous finesse, mainly thanks to Katche.

Robertson’s voice has power and presence. In the main, synths are eschewed in favour of Lanois’s ambient textures and Bill Dillon’s ethereal guitars. Robbie himself supplies some biting, Roy Buchanan-ish Tele leads here and there. Bob Clearmountain works his magic on the mix. We’ll pass swiftly over the two U2 collaborations.

But Robbie Robertson is a corking debut and fascinating companion piece to Joni Mitchell’s Chalk Mark In a Rainstorm, Steve Winwood’s Back In The High Life, Neil Young’s Freedom and Bob Dylan’s Oh Mercy (and possibly trumps all of ’em). This was a really interesting era for the heroes of the ’60s and ’70s. Live Aid – featuring such strong showings by Jagger, The Who, Queen and Bowie – had given the older guys a new lease of life and reason to get back out there. However, Robbie Robertson was surprisingly somewhat of a disappointment sales-wise, only reaching #38 in the US and #23 in the UK.