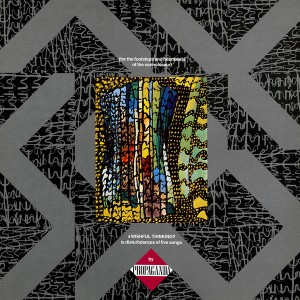 ZTT Records – under the auspices of Trevor Horn – really used the remix format.

No throwaway, rush-released projects for them. Their remixes were petri dishes for sonic experiments and situationist pranks, many worthwhile and innovative.

And of course several remix albums were released on ZTT – Grace Jones’ Slave To The Rhythm was essentially one song done eight different ways, and there was also a whole Frankie Goes To Hollywood LP dedicated to ‘Two Tribes’ remixes.

But maybe a lesser-known example is Propaganda’s Wishful Thinking, a reworking of the Düsseldorf unit’s seminal 1985 album A Secret Wish, originally produced by Stephen Lipson (with one track – ‘Dr Mabuse’ –  helmed by Horn).

A Secret Wish’s stock seems to keep rising year after year, gaining more fans and sounding better than ever. But Wishful Thinking is a weird project, to say the least.

Co-remixer (alongside former tape op Bob Kraushaar) Paul Morley’s absurd liner notes quote Goethe and boast that the album is the result of ’39 studio hours’, which, by ZTT’s painstaking standards, doesn’t actually sound like much.

But it’s a thrilling, epic collection just the same, regurgitating many of the original album’s sonic motifs but in a different order and a different place on the stereo spectrum.

‘Jewelled’ fuses the two versions of ‘Duel’ from the original album, mixing her ‘angry’ vocals with the backing from the ‘pop’ version. It’s pretty funny and genuinely surreal.

Hidden elements embedded in the original mix are subtly revealed, like Lipson’s chiming guitars on ‘Laughing’. ‘Loving’ exposes and amplifies Andy Richards’ gorgeous piano and synth from ‘The Murder Of Love’, finally revealing it as the fantastic pop song it is.

The two versions of ‘Dr Mabuse’ bring out Horn’s genius and natural flair for the dynamic, showcasing not one but two brilliant bass vamps and a whole host of other sonic delights (thrillingly, one version is used in the absurd opening credits of John Hughes’s 1987 movie ‘Some Kind Of Wonderful’).

But possibly the best track on Wishful Thinking is the closing ‘Thought’, an excerpt of the band’s version of Throbbing Gristle’s ‘Discipline’.

All in all, it’s an epic, exciting hour of music, and a real one-off. For anyone still fascinated by A Secret Wish, as this writer is, it’s required listening.

The band probably hated it, though Brucken did donate one of her paintings for use on the cover (but then she was married to Morley at the time…).