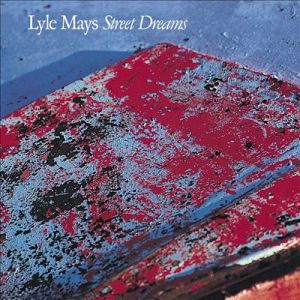 I was a fan of most things jazz/rock as a 16-year-old, scuttling off to HMV or Virgin in central London to buy the latest stuff by John McLaughlin, Mike Stern, Steps Ahead, John Scofield, Bireli Lagrene and Miles.

Whilst Pat Metheny was never a favourite, I dug American Garage and 80/81, and always had a soft spot for Lyle Mays’ keyboard playing. His 1987 debut album featured a fantastic band (Bill Frisell, Marc Johnson, Billy Drewes, Alex Acuna and Nana Vasconcelos) and promised a lot for the future.

1988’s Street Dreams didn’t disappoint. It is to some extent a big-budget ‘vanity project’, full of guest appearances and experiments, but it’s all the better for that and virtually impossible to categorise.

Recorded exclusively at the Power Station in New York, Street Dreams has the range and ambition of some key pop albums of the era – yup, this is fusion’s Welcome To The Pleasuredome… It also for the most part avoids the new-age sentimentality that Metheny is sometimes prone to.

I delved deeply into Street Dreams – it was a real Walkman album, creating a movie in one’s mind. To this day, I seldom listen to a tune in separation; I have to check out the whole thing in one sitting.

‘Feet First’ sounds like an outtake from Donald Fagen’s Nightfly with the vocals taken off (and features some classic Steve Gadd); ‘August’ and ‘Hangtime’ are superb tone poems featuring tasteful work from Frisell, Johnson and Peter Erskine.

‘Before You Go’ is space-age muzak with sprawling orchestrations out of the Claus Ogerman book, and ‘Possible Straight’ is cracking big-band jazz with some great drumming by Steve Jordan.

The title track is just bonkers and has to be heard to be believed. It takes in elements of prog rock, minimalism (with its Reich-influenced marimba), New Age textures and a playful, Hermeto Pascoal-style Latin workout with Mays’ piano at its most Keith Jarrett-like.

Compared to the sterility of most major-label jazz releases these days, Street Dreams still sounds pretty fresh, even if it is a touch lighter than what passes for jazz/rock or fusion in 2015.