The 1980s are littered with Brit pop bands going ‘across the pond’ to work with US producers and musicians – Aztec Camera, Scritti Politti, Love And Money, Wet Wet Wet and Simple Minds spring to mind, but the list goes on and on.

It was almost a rite of passage, or – according to some music critics of the slightly more cynical persuasion – a desperate attempt at credibility.

You could hardly level that accusation at Tracey Thorn and Ben Watt, AKA Everything but the Girl. They were headhunted by legendary producer Tommy LiPuma, who had just put the finishing touches to Miles Davis’s Amandla, and their ‘Driving’ single (released in early 1990 but recorded spring 1989) seems a near-perfect marriage of US and UK sensibilities.

I confess I hardly knew anything about EBTG when my brother first played me ‘Driving’. I just heard something extremely classy, with intriguing chord changes, a great singer and strong jazz flavour.

I didn’t know Tracey and Ben had spent much of the ’80s building up a considerable rep as ‘indie jazz/folk’ darlings of the music press and enjoying not inconsiderable commercial success too, but I was possibly vaguely familiar with Tracey’s gorgeous vocals on The Style Council’s ‘Paris Match’, a favourite of my dad’s muso mates back in the mid-’80s.

Taken from The Language Of Life album, the song was recorded in LA at the famous Ocean Way and Sunset Sound studios with pretty much the finest session players money can buy (Omar Hakim on drums, John Patitucci on bass, Larry Williams on keys/arrangements, Michael Brecker on tenor).

But, according to Tracey’s superb memoir ‘Bedsit Disco Queen’, the American musicians were totally ignorant of the fiercely independent English scene from which Tracey and Ben had emerged.

When Larry Williams found out that EBTG had recently recorded at Abbey Road, he blurted out: ‘Wow! Abbey Road! The home of the Beatles!’ Tracey’s reply: ‘God, I HATE the Beatles.’ There was a pregnant pause. Eventually Williams spluttered out: ‘You h-h-hate the Beatles?’

But such musical differences were all in a day’s work for EBTG.

‘Driving’ obviously sounds more like Anita Baker (I’d love to hear her cover it) than, say, The Smiths. It’s sophisticated but still has bite, with rich chords, an intriguing ABAA structure and glorious Brecker solo (inexplicably with a different, inferior take on my 7” vinyl version).

Ostensibly a song about ‘cars and boys’ (though written solely by Ben Watt), maybe one could read it as a clear concession to the US marketplace. Or is it a response to Prefab’s ‘Cars And Girls’? 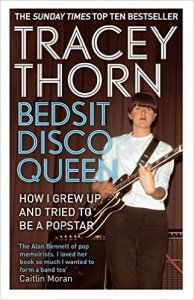 ‘Driving’ became somewhat of an airplay hit in the States (though surprisingly only reached #54 in the UK), and led to several high-profile US gigs which nevertheless unfortunately seemed to precipitate a crisis of confidence for Tracey.

The EBTG live band, which included future smooth jazz star Kirk Whalum on sax, whipped the crowds into a frenzy night after night, but there wasn’t much space for her subtle, low-key vocals any more.

Cue a few years of soul-searching and a distinct change of direction, exemplified by 1994’s Amplified Heart.