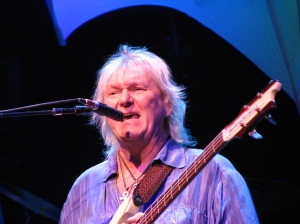 It’s the beautifully-written piece you’d hope to read from a newly-awarded professor of music, but I thought it well worth quoting Bill Bruford’s tribute to Chris Squire in full (with apologies for tardiness), which I believe first appeared on the Yes website.

‘Really saddened to hear of the death of my old Yes band-mate, Chris Squire. I shall remember him fondly; one of the twin rocks upon which Yes was founded and, I believe, the only member to have been present and correct, Rickenbacker at the ready, on every tour. He and I had a working relationship built around our differences. Despite, or perhaps because of, the old chestnut about creative tension, it seemed, strangely, to work.

He had an approach that contrasted sharply with the somewhat monotonic, immobile bass parts of today. His lines were important; counter-melodic structural components that you were as likely to go away humming as the top line melody; little stand-alone works of art in themselves. Whenever I think of him, which is not infrequently, I think of the over-driven fuzz of the sinewy staccato hits in ‘Close to the Edge’ (6’04” and on) or a couple of minutes later where he sounds like a tuba (8’.00”). While he may have taken a while to arrive at the finished article, it was always worth waiting for.  And then he would sing a different part on top.

An individualist in an age when it was possible to establish individuality, Chris fearlessly staked out a whole protectorate of bass playing in which he was lord and master. I suspect he knew not only that he gave millions of people pleasure with his music, but also that he was fortunate to be able to do so. I offer sincere condolences to his family.