But you can’t say he wasn’t prolific, and hey, he’s Neil Young – there’s always something good going on somewhere. But none of these projects came anywhere near the commercial jackpot, to the extent that his label boss David Geffen sued him for ‘unrepresentative’ product!

But, with the release of 1988’s This Note’s For You, Young was getting back on track. He had returned to the Reprise label of his peak years and was gigging with a hard-hitting ten-piece band The Bluenotes (later changing its name to Ten Men Workin’ after a legal challenge from Harold Melvin) which featured a hot horn section and cracking new drummer Chad Cromwell. 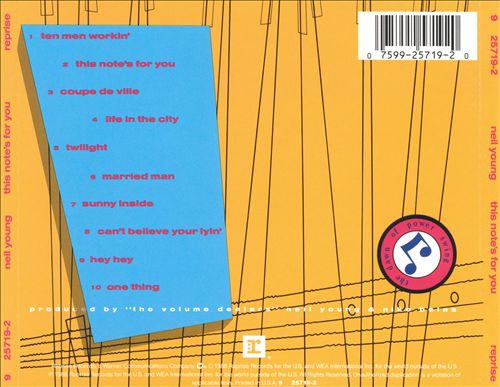 Neil had ten new songs in the can too, veering between two-chord R’n’B stompers and love ballads in the ballpark of his teenage hero Roy Orbison. He was also playing as much if not more lead guitar than he ever had in his solo career, this time in the biting, incisive style of Alberts King and Collins.

Lyrically, the songs were basically about workin’ hard, lookin’ for love, not sellin’ out and havin’ a good time, but with more humour than Bruce or Billy Joel. ‘I’m a married man – respect my happy home!’ he barks on the strident, irresistible ‘Married Man’. Neil gave writer Paul Zollo some cool insights into the writing of the song in the book ‘Songwriters On Songwriting’:

‘Oh, I like that song. I think I wrote that in my car. I have a ’54 Caddy limo. I was on my way down from Northern California to play with the Bluenotes. I was on Highway 5. Our driver was listening to tapes and I was playing my guitar…’

Neil’s tremulous voice croons ‘You have changed my life in so many ways’ on ‘Can’t Believe Your Lyin’, and it’s both touching and amusing. ‘Ten Men Workin” and ‘Life In The City’ are driving old-school R’n’B gems while ‘Sunny Inside’ is almost Brian Wilsonesque in its charming naivety.

Then there’s the title track, the standout cut on the album (though it inexplicably fades way too soon). A rum, anti-product-placement protest song which nevertheless manages to mention four big brands (and of course mocks Budweiser’s ‘This Bud’s For You’ campaign), it defiantly has its cake and eats it. It’s also a total blast.

In a delicious irony, the old hippie who had spent most of the ’80s in purgatory made one of the great vids of the decade (winning Video Of The Year at the 1989 Video Music Awards), with notable help from writer Charlie Coffey and legendary director Julien Temple. Temple talked about his motivations for making the video:

‘Beer companies and the like were beginning to take over music. A lot of beer ads were using rock musicians. The line between videos and commercials was blurring. We managed to get banned from MTV and win the Video Of The Year award. That was the peak of my video-making career…’

The clip mostly mocks the series of Michelob beer ads which featured the likes of Genesis, Eric Clapton and Steve Winwood. And it didn’t scrimp on Michael Jackson and Whitney Houston lookalikes. What’s also notable and totally unprecedented is that Neil decided to use a live take of the song for this video, completely different to the album version. Which major star would have the balls to do that today?

This Note’s For You was not a hit, only reaching number 61 in the US album chart. But Neil was laying down a marker for the classic follow-up Freedom. And he had also tapped into something very prescient by focusing on guitar-led soul, blues and R’n’B forms, echoing the resurgence of Clapton, Buddy Guy, John Lee Hooker, Jeff Beck, Albert Collins and Gary Moore, and emergence of hotshots like Jeff Healey and Robert Cray.

I was watching a newly-discovered Jaco Pastorius Q and A session from 1985 this week. Poor Jaco clearly wasn’t in the best of health, neither mentally nor physically.

Apparently he turned up at the Musicians Institute in LA without a bass and had to borrow a student’s axe. But when he played it, despite the instrument’s shortcomings, he sounded exactly like himself. In other words, his sound was completely in his fingers, not in any amp or effects pedal.

It got me thinking about other players who always sound only like themselves, no matter what axe they use or what kind of music they’re playing. Near the top of that list would have to be the great American guitarist, singer and songwriter Robert Cray.

In guitar terms, he sticks pretty rigidly to his tried and tested sound: a Fender Strat plugged straight into the amp, no effects apart from a very occasional tremolo pedal, and very, very hard picking. But, in the process, on Bad Influence he plays three or four of the most electrifying guitar solos of the ’80s, proving himself a worthy heir to Albert King and Albert Collins.

But his tough guitar style is a contrast to a fairly sweet, soulful vocals and songwriting which reflect the influence of Al Green and BB King more than Muddy Waters or John Lee Hooker.

Bad Influence was Robert’s second official release, and it was pretty much the one that alerted the wider world outside of blues aficionados to his potential. The Robert Cray Band had built up a formidable live following in the early ’80s, touring relentlessly on the West Coast and in Europe.

With the help of producers Bruce Bromberg and Dennis Walker, they were ready to take that consistency into the studio. And it certainly helps that there are no trinkets of ’80s production present on the album, no synths or dated drum sounds – Bad Influence mostly just sounds like a great band playing live in the studio, with the occasional addition of horns and Hammond organ.

Bad Influence is mainly known for its superb cover versions: Johnny Guitar Watson’s ‘Don’t Touch Me’ and Eddie Floyd’s ‘Got To Make A Comeback’, both slow 6/8 jams, the former angry and biting, the latter sweet and soulful. ‘The Grinder‘ is another slowish 6/8 with a killer Cray solo. The CD version also comes with a great cover of the New Orleans R’n’B classic ‘I Got Loaded’.

The best-known songs from the album are probably the minor-key blues/funk standard ‘Phone Booth’ (featuring not one but two classic guitar solos), later covered by Albert King, and the title track which was subsequently covered by Eric Clapton on his less-than-essential August album (the two have collaborated many times since).

Also essential are the super-funky ‘So Many Women So Little Time’ and Bo Diddley-esque ‘No Big Deal’. Lyrically, my personal favourite is probably ‘Waiting For The Tide To Turn’, a kind of ‘ironic’ blues about procrastination. Vocally, ‘March On’ is also fantastic.

To date, Bad Influence has (according to some accounts) sold over a million copies, showing how much the blues was a hot ticket in the ’80s. Cray’s two follow-ups False Accusations and Strong Persuader sold even more, but arguably placed more emphasis on production and songwriting than on uncut guitar playing. Production was also a bit of an issue on the Cray/Collins/Johnny Copeland collaboration Showdown, which could and should have been a classic. But no matter – Robert is the real deal.