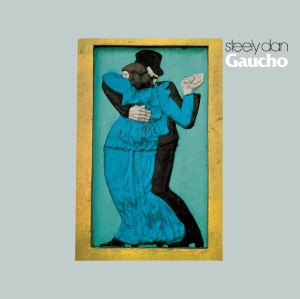 When I was about 12 or 13 years old, I was obsessed with my dad’s very old ABC Records cassette of Steely’s Greatest Hits.

It may have been the opening eight bars of ‘Do It Again’ that did it. I never looked back; they quickly became my favourite ‘band’, and remain so to this day.

I heard Gaucho – which turns 35 today – a few years later, maybe in 1986 or ’87, not even knowing of its existence until then. The album knocked me out. I practiced my drums to it every day.

By all accounts, it was a laborious and very expensive record to make, with various obstacles: whole songs were inadvertently erased (‘The Second Arrangement’) and other classics shelved.

Walter Becker endured a serious injury after being hit by a cab and there was even a lawsuit from Keith Jarrett regarding the similarity between the title track and his 1974 composition ‘Long As You Know You’re Living Yours’.

But it all paid off in the end; Gaucho was sumptuously mixed and mastered with songs that were built to last. Guitarist Steve Khan was a key contributor to Gaucho. Along with Larry Carlton, he would seem the perfect player for their later work, combining a jazz sensibility with a great feeling for the blues and also speedy sight-reading skills.

I was delighted to catch up with Steve from his New York base to talk about his role on the album and the ‘Glamour Profession’ session that led to one of the great guitar solos in the Steely canon.

On getting the call to play on Gaucho:

SK: I had played on almost all the tracks for Gaucho (even though I was erased from some, and some tracks didn’t survive), so I was a pretty healthy part of that recording. As to why they thought of me, who the hell really knows? Donald tends to like players who have a jazz sensibility but who also have a bluesiness or soulfulness about their playing. I guess, in his eyes, I fall into that category of possibilities.  I was the last thing to go on ‘Glamour Profession’, just as I was the last one to go on ‘Third World Man’ as well.

SK: The first thing we did was all the rhythm parts. In a sense that was very simple because they just wanted me to double what some kind of synth had already played – probably sequenced – and with perfect time. At about 3:30 in the track, there’s a little four-bar guitar chorale that Donald wanted me to play, so we wrote out the four voices and I played each voice individually, giving each one a touch of ‘soul’ with a little personal phrasing and vibrato here and there. Then, I think that we returned to doing the rest of the rhythm part. Honestly, I don’t recall if I did the rhythm part on my Telecaster Custom or not – when I listen now, there’s a crispness to the sound which leads me to believe that this was the Tele.

SK: I used my new Gibson ES-Artist (with active electronics) – which is really a 335 – and after that solo, I never used it again – I sold it back to Manny’s Music! In the end, all the fancy things that they can do to guitars are fine but everything comes down to one’s touch, and I’m mostly speaking about the fingertips on the left-hand. If one has a good touch, the music will translate through virtually any amp. Equipment is just a tool.

In concept, the solo represents a lot of linear concepts that I had been working on for years. And only in hindsight, many years later, after the publication of my second theory book ‘PENTATONIC KHANCEPTS‘, I hear these kinds of linear ideas at work. Based upon the chord progressions, it all seemed to work perfectly because, in the end, it is a combination of the angular with a bluesy feeling to it – and that’s what Donald and Walter like – with a touch of harmonic sophistication.  I think that the things that I was working on, a long time ago, in terms of other approaches to changing up the normal jazz/bebop-oriented construction of lines, seemed to be very present on ‘Glamour Profession’. If you apply the Pentatonic Khancepts to those chords, you’ll see/hear exactly what I was doing then, mixed in with a healthy dose of blues too.

The horns and the synth lines were already there, so it becomes like playing through a bit of a minefield because you have to dance around those other linear elements. I did one complete take which I actually liked very much. Then, of course, they asked me to do another one. Because of track space, I couldn’t have done more than three of them. Then, thank goodness, I think that we all felt that the first one had the most ‘meat’ to it, and so we would work from that. Then we went back through it. They kept all the phrases that they loved and asked me to try something else in a number of spots. Whether I wanted to or not, it’s still a job and you do what you are asked to do!

For more on Steve’s contribution to Gaucho and the rest of his career, check out his website and this great interview with Leo Sidran.

For much more about Steely Dan, check out ‘Reeling In The Years’ by Brian Sweet and ‘Aja 33 and 1/3’ by Don Breithaupt.