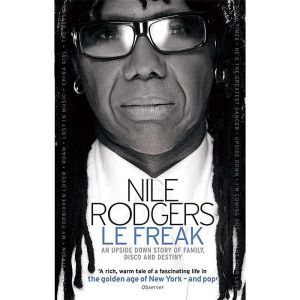 One of the few musical blessings of the last decade was Nile Rodgers’ career reinvention.

But the future had looked pretty bleak at the outset of 2010, with serious illness virtually putting paid to his live career and no new studio product in sight.

Then of course there was a well-received guest spot on Daft Punk’s ‘Get Lucky’ and a glorious concert reboot of the Chic brand, which went from strength to strength as the decade progressed. So it seems a good time to revisit ‘Le Freak’, Nile’s 2011 memoir (and it accords nicely with my current early-’80s NYC obsession).

The focus on gigging during the last decade has been a distinct volte face for a guitarist/songwriter/producer best known for his studio work with Chic, Diana Ross, Madonna, David Bowie, Sister Sledge, Johnny Mathis and Al Jarreau.

Chic were to disco what Steely Dan were to rock, bringing jazz chords, complex arrangements and subtly subversive lyrics to the top of the charts, but it’s easy to forget how out of fashion they were in the early ’80s, as ‘Le Freak‘ grippingly outlines.

But it’s also that rare thing for a music memoir, arguably at its best when it steers away from the music. Rodgers was born to a 14-year-old jazz-loving mother in late-1950s New York City, and his early life was a jaw-dropping sequence of underage sex, drug addiction and bohemian excess on all levels. His stepfather Bobby, a heroin-addicted beatnik, nicknamed the asthmatic Rodgers ‘Pud’, short for ‘pudding pie’, and used to reprimand him thus: ‘Pud. Dig yourself.’

Soon, both parents were junkies, and Rodgers turned to TV, movies, truancy and illicit substances, finding his own brotherhood of Puerto Ricans and Italians in Greenwich Village. Rodgers brilliantly captures the flavour of this bohemian underground and black music scene that flourished in the big cities of the US in the ‘60s.

There are tales of studying jazz harmony with legendary pianist Dr Billy Taylor, an early gig with the ‘Sesame Street’ house band and notable cameos from Thelonious Monk, Lenny Bruce, Timothy Leary and Jimi Hendrix. Later his Harlem Apollo debut sees Rodgers being chased around the stage by a crazed Screamin’ Jay Hawkins.

With musical soulmate, bassist Bernard Edwards, he toured the Chitlin’ Circuit playing the soul, jazz and R’n’B hits of the day, returning to New York to see that dance culture was taking over. Their Big Apple Band quickly became Chic, a black fusion of Roxy Music and KISS, and although Chic quickly became synonymous with the disco movement, their roots in jazz, rock and R’n’B and desire to always include a Deep Hidden Meaning (or DHM) in their lyrics always kept them at some remove from the likes of the Bee Gees.

But things take a turn for the worse when the scene that embraced Chic suddenly implodes and gives way to New Wave, and Nile is brutally candid about his embarrassment that his band (and first solo album) can’t get arrested. Not in David Bowie’s opinion, though, and the extended riff on the making of Let’s Dance is essential reading for any fan of that album.

The passage on the passing of his musical brother Edwards while on tour with a reformed Chic is also moving and perfectly judged, encapsulating Rodgers’ philosophy of music and life.

All in all, ‘Le Freak’ is a fast-moving, well-written, original account of the life of a self-confessed ‘half-hippie, half Black Panther’, and a must for anyone with even a passing interest in black music over the last 50 years.

Rodgers has also intimated that there may be a second volume on the way – yes please. Grace Jones, Mick Jagger, Paul Simon, Jarreau, Mariah Carey, Robert Plant, the B-52s and David Lee Roth are only mentioned in passing, and it would be good to get the full story of Chic’s live renaissance.