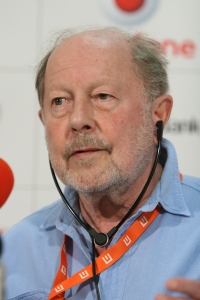 London-born filmmaker Nicolas Roeg, who has died aged 90, will surely be remembered as one of the all-time greats.

He began his career as either lighting cameraman or director of photography on some key films of the 1960s: ‘The Caretaker’, ‘Doctor Zhivago’, ‘Lawrence Of Arabia’, ‘The Masque Of The Red Death’, ‘Far From The Madding Crowd’, ‘Fahrenheit 451’. He then of course co-directed (alongside Donald Cammell) the astonishing Mick Jagger vehicle ‘Performance’.

Roeg went to to make some of the finest films of the 1970s – ‘Walkabout’, ‘Don’t Look Now’ and ‘The Man Who Fell To Earth’, and began the 1980s staking a claim to being England’s greatest living director. And that was when his films really came alive for me. Many of the above were shown regularly on terrestrial TV during the decade. Then came a series of always-surprising new works, some of which also transferred quickly onto the small screen.

‘Bad Timing’ (1980) was a brutally candid portrayal of a love affair gone wrong, starring Art Gartfunkel and Theresa Russell in the first of her memorable lead roles for then-husband Roeg (a role that was apparently first intended for Sissy Spacek).

‘Eureka’ (1983) is little seen these days, and almost totally forgotten, but it’s unpredictable and brilliant. Gene Hackman heads up a superb cast including Mickey Rourke, Joe Pesci, Russell and Rutger Hauer. ‘Insignificance’ (1985) was a film to match the best of Roeg’s ’70s output, a what-if tale based on Terry Johnson’s play about a meeting between Marilyn Monroe, Joe DiMaggio, Joseph McCarthy and Albert Einstein.

‘Castaway’ (1986), a desert-island survival tale starring Oliver Reed and based on Lucy Irving’s bestselling book, was given a critical mauling but these days still looks like an incredibly vital film. ‘Track 29’ (1987) was, if anything, even stranger, a Dennis Potter-penned story about a demented manchild, with Gary Oldman and Russell the memorable leads.

And Roeg finished off the decade with a fine adaptation of Roald Dahl’s ‘The Witches’ (1990), well worth digging out for the kids this Christmas if you’re after some mildly-menacing, icky fun. Farewell to a bona fide Brit movie hero.