Even as the streaming revolution sweeps all before it, there are a few aspects of physical music that seem to be thriving: vinyl and the ‘historical discovery’.

Bass superstar Jaco is now a worthy recipient of both, courtesy of Truth, Liberty & Soul, a complete gig recorded at the Avery Fisher Hall in New York City on 27 June 1982, part of that summer’s Kool Jazz Festival.

The concert was originally broadcast live on NPR but has lain in the vaults for decades, and it took Resonance Records (via vaultmeister Zev Feldman) six years to prepare these tapes for release.

The album catches Jaco at somewhat of a crossroads; by most accounts, June 1982 was the last time he was truly ‘together’ in terms of his mental wellbeing, the wheels really coming off during the Japanese tour later that autumn. (Fans of a certain age may fondly remember the televised live gig from the Montreal Jazz Festival which took place on 3 July 1982 – see below).

The question is, if you already own Jaco’s 1983 live album Invitation (released in slightly expanded form as Twins in Japan), also featuring the big band, is it worth getting this one? The answer is a resounding yes. It’s thrilling to hear a whole gig in real time by one of the last true jazz titans.

The sound is superb – crisp, deep and rich. The packaging is excellent, with a weighty booklet full of incisive essays and previously unseen photos. Anyone sick of bandleaders’ endless yakking to the audience to run down the clock these days will be pleased to hear that Jaco doesn’t utter a single word until a garbled band announcement during the closer ‘Fannie Mae’ – he’s there to play music.

There are one or two longeurs – we could probably do without the extended percussion and drum ‘improvisations’. And it has to be said that Jaco doesn’t sound on completely top form during his solos, though that’s possibly due to the size/acoustics of the venue, alluded to by a few contributors in the liner notes. But his accompaniment is typically brilliant throughout.

Frankly, it makes one desperate to attend such a gig in these crazy times. Truth, Liberty & Soul is a valuable release and an absolute must for anyone who owns any Jaco or Jaco-era Joni Mitchell/Weather Report albums. 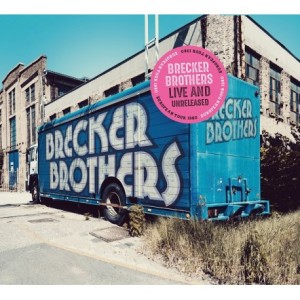 Horn sections – they sure divide opinion, especially in the ‘pop’ realm.

Some people just cannot stand all of that pomp and circumstance, while others get turned on by a hot, punchy chart.

But like ’em or hate ’em, some great records just wouldn’t be the same without the horns: The Teardrop Explodes’ ‘Reward’ for example.

But who are the most-recorded sections of all time? You’d get very short odds on The Brecker Brothers, comprising Michael on tenor and Randy on trumpet, occasionally augmented by David Sanborn on alto too.

They graced hundreds of recordings before Michael’s death in 2007, including Parliament’s ‘Chocolate City’, Todd Rundgren’s ‘Hello It’s Me’ and Dire Straits’ ‘Your Latest Trick’.

Under their own name, seven studio albums showcased a really cool sound with funky grooves and intricate harmony, somewhere between Stevie Wonder and Steely Dan.

And now they’ve been given the full-on archive treatment, a new Live And Unreleased album featuring a complete two-hours-plus gig with no edits or overdubs, recorded in Hamburg on 2nd July 1980.

This is a really impressive package, a beautifully-recorded double with extended liner notes by Bill Milkowski and additional, amusing memories from Randy Brecker.

The sh*t-hot band includes Neil Jason on bass (familiar to fans of Roxy Music’s Flesh & Blood and Avalon), Barry Finnerty on guitar (most famous for a short stint with Miles Davis), Mark Gray on keys and Richie Morales on drums.

The material is a mix of BB favourites like ‘Squids’, ‘Sponge’, ‘Some Skunk Funk’, ‘Straphanging’, ‘I Don’t Know Either’ and ‘East River’. Pleasingly, these are pretty faithful to the original studio versions tempo-and-arrangement-wise, but there’s also a big emphasis on extended solos and one-chord vamps.

It’s also clear that, by 1980, Michael was giving Randy a serious run for his money on the composing front – his tunes and sometimes extraordinary solos dominate proceedings, particularly on the sprightly ‘I Don’t Know Either’ and ‘Tee’d Off’.

Finnerty gets a hell of a lot of solo time but is generally pretty characterless compared to other Brecker-approved studio guitarists (Hiram Bullock, Steve Khan), while Gray is excellent but too low in the mix.

Morales is rock-solid but, again, fairly anonymous compared to other Brecker favourites Steve Jordan, Terry Bozzio, Steve Gadd and Harvey Mason (hardly surprising, since they are three of the all-time greats…). Jason, with his big, buoyant, funky sound, is the star of the rhythm section.

As usual, ‘Some Skunk Funk’ makes for fascinating listening – the funk/fusion standard has become a kind of test piece for drummers (Harvey Mason, Billy Cobham and Terry Bozzio all had memorable cracks at it, offering subtly different readings). Morales has a good go here but again lacks the invention and drive of the aforementioned.

So: three-and-a-half stars for the music, five for the package. It’s definitely worth immersing oneself in it on vinyl or CD, helped by Randy’s witty between-song comments.

It’s a really strong live album with some great performances, and exemplifies an interesting period for jazz/rock when good grooves and extended solos took precedence over technical chops. Even if you can’t stand horn sections…

He was beaten up outside the Midnight Bottle nightclub in Wilton Manors, Florida.

British Jaco fans had particularly meagre pickings in the late 1980s. You gleaned whatever info you could from magazines like Bass Player and The Wire or swapped gossip with muso pals.

I’m not even sure I knew he had passed away when I got my hands on import albums like Stuttgart Aria and Live In Italy, both recorded with the brilliant French guitarist Bireli Lagrene, or heard his guest spot on Mike Stern’s Upside Downside.

Then my dad came home from work one day around 1989, excitedly talking about a Jaco concert movie he had secured the rights for, eventually broadcast on Channel Four as part of the ‘Sounds Of Surprise’ series of jazz films.

Sure enough, the 1982 Montreal Jazz Festival show was a whole new insight into this master musician, shot at a time when he was firing on all cylinders and one of the biggest ‘jazz’ stars on the planet. He was ostensibly touring his Word Of Mouth album at the time, but didn’t play one tune from it.

Particularly notable are a breezy ‘Donna Lee’ and brilliant version of Mintzer’s ‘Mr Fone Bone’, starting at 27:40. Jaco’s soloing throughout the gig is beautiful – emotional, nuanced, dramatic. On the closer ‘Fannie Mae’, he plays the blues with as much feeling as Alberts King or Collins.

Steve Khan, one of jazz’s most underrated and distinctive guitarists, made two fine fusion albums during the 1980s: Eyewitness and Casa Loco.

Khan has also become well known as a master-interpreter and reharmoniser of non-guitar jazz compositions by the likes of Andrew Hill, Herbie Hancock, Wayne Shorter, Ornette Coleman, Lee Morgan and Randy Brecker. His new collection Backlog, the third in a Latin Jazz triptych following Parting Shot (2011) and Subtext (2014), continues to plunder the songbooks of his favourite composers.

The album kicks off with the killer one-two of Monk’s ‘Criss Cross’ and Greg Osby’s ‘Concepticus In C’. The former is inspired by the late great pianist Kenny Kirkland’s Latin version which first appeared on his fine 1991 debut album.

Says Khan, ‘It’s a wonderful arrangement and so good that it’s hard to escape its influence. It took me years to find a way to do the tune in a way where I could put my own stamp on it. As everyone already knows, I love Monk’s compositions and have recorded many of them. I happen to feel that Monk’s tunes have a way of fitting into a Latin context, as if they were made to be interpreted in that style.’

The Osby tune was played by Khan during their tenure together in the New Sound Collective band; the guitarist clearly relishes arranging his version of ‘Concepticus’ on Backlog, adding a funky Joe Zawinul flavour to the tasty harmonies and quirky rhythmic concept.

‘Latin Genetics’, composed by Ornette Coleman and first appearing on his In All Languages album, features a fine guest spot from Randy Brecker on trumpet.

On first listening, it seems a light, almost joyous piece of music, but Khan has a different take on it: ‘It’s funny to me that people see this tune as being so happy – I actually see it as a rather dark piece of music, one with many sinister and even humorous qualities.’

Backlog‘s other Coleman cover version is ‘Invisible’, featuring Bob Mintzer on sax, originally recorded in 1958: ‘It comes from one of his earliest albums, Something Else!!!!, featuring an acoustic piano,’ says Khan. ‘Every time I hear this tune, I feel that Ornette’s playing and improvisational concepts are a bit constricted by having the chord changes applied so literally. There seems to be an absence of space. So, in my interpretation, though there are chord changes, both Bob and I play pretty much unaccompanied, and that’s really how I like it.’

Clearly a labour of love, Khan wonders whether it will be his final album: ‘When I recorded Parting Shot, for reasons of the health and condition of my left hand, I thought that was going to be the final album. Then when I decided that I felt well enough to record Subtext, I was even more certain that that would be the final album. But, as 2015 unfolded, I came to the simple conclusion that I just do not feel alive unless I am creatively involved in the formation of new music. So, while I can still do it, I had to do everything possible to record. Can I foresee ever being able to self-finance another recording of my own again? I don’t want to utter the word “never” in conjunction with such a thought, but honestly, I really don’t know. With the release of any new piece of work, there is always hope for better days and better times, but this remains to be seen…’

Backlog is out now on ESC/Tone Center.

Read the full interview with Steve at his website.