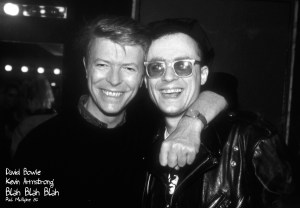 But that would be unfair on the guitarist; as well as stellar work with Bowie (Live Aid, ‘Absolute Beginners’, ‘Dancing In The Streets’) and Iggy Pop (Blah-Blah-Blah, countless world tours), he has also contributed to classic albums by Prefab Sprout, Thomas Dolby and Morrissey and performed live with Roy Orbison, Sinead O’Connor, Grace Jones, Propaganda and PiL.

This entertaining Pizza Express show was half wonderfully-indiscreet spoken-word memoir and half gig. Decked out in all-black rock-star garb, Armstrong described his initiation into the music world via an obsession with Zappa’s ‘Black Napkins’ and postal-order guitar handbooks, and lamented the current pop scene as ‘just another part of consumer culture’.

He spoke of one life-changing morning in early 1985 when he received the call from legendary EMI A&R man Hugh Stanley-Clarke: an invitation to Abbey Road to record with ‘Mr X’. Arriving at the famous address, Armstrong was shown upstairs to a tiny demo studio (not the big Beatles-frequenting Studio 1 downstairs) to find a bunch of session players and a smiling, suited Bowie holding an omnichord and uttering the totally superfluous ‘Hi, I’m David!’. Bowie then proceeded to teach the band a song called ‘That’s Motivation’ (from the ‘Absolute Beginners’ soundtrack) two bars at a time – and they then recorded it that way too!

A few days later, Bowie summoned Armstrong to Westside Studios near Ladbroke Grove for the ‘Absolute Beginners’ and ‘Dancing In The Street’ recordings (the former with vocals by Armstrong’s sister, then working behind the till at Dorothy Perkins, responding to Bowie’s request for a ‘shopgirl’ to sing duet with him!). The latter session was of course graced by an absurdly perky Mick Jagger. Apparently Bowie and Jagger spent most of the vocal sessions shouting ‘Let’s ring Maureen!’, their nickname for Elton John.

Armstrong then told great tales of Live Aid, mainly highlighting Bowie’s incredible generosity: fluffing the names of backing vocalists Helena Springs and Tessa Niles during his onstage band introductions (no other solo artist introduced his/her band on the day), according to Armstrong he immediately apologised profusely to the singers as soon as they were offstage.

There were further funny tales of Gil Evans, Iggy and McCartney (who apparently once smoked some unbelievably strong grass with Armstrong, said ‘That’s you stoned!’ to the erstwhile guitarist, then promptly disappeared) and an exceptionally eccentric Grace Jones who allegedly took a distinct liking to Armstrong at a party, taking him by the hand and leading him away for some sexual shenanigans. Who should intervene but Bowie, grabbing Armstrong’s other hand and whispering in the guitarist’s ear: ‘No you don’t. She’ll have you for breakfast, sunshine…’

In the second half, Armstrong was joined by Iggy bandmates Ben Ellis on bass and Matt Hector on drums to perform songs that he’d played live with all the aforementioned stars. Efficiently sung and superbly played, it was nevertheless a somewhat humourless set of music that only served to emphasise the difference between a perennial sessionman and born headliner.

But this was still a hugely enjoyable evening, foregrounding a time when music really was transformative. We await Armstrong’s forthcoming memoir with great anticipation.

Excellent recent documentary ’20 Feet From Stardom’ busted the myth once and for all that backing singers aren’t ‘good’ enough to be solo artists. In fact, the contrary is often true: they make the artist sound and look better, and there are often a myriad of reasons both professional and personal why they haven’t become headliners in their own right.

It’s a real page-turner and ’80s guilty pleasure, a voyage through all the pop fads of the decade (and decades since) and a search for a fruitful work/life balance in the face of demanding touring schedules and family commitments.

We follow Niles’ career from her early days as factory worker, cabaret entertainer and ‘Benny Hill Show’-auditioner to the late-’70s/early-’80s London live music scene, where good, young female singers could make a decent living at the city’s many nightclubs. She is excellent at painting a picture of this somewhat dodgy state of affairs, when a pre-New Romantic London was anything but swinging and ‘Page 3’ culture was at its peak.

But a shrewd volte face leads Tessa into the burgeoning jazz/funk scene and decent, reliable gigs with Morrissey Mullen and Incognito, plus a chance meeting with US ex-pat arranger and producer Richard Niles. Though their subsequent marriage gives Tessa her professional surname, it also leads to some conflicts of interest when he helms her commercially-unsuccessful solo debut.

But then Trevor Horn is on the blower and she is whisked into the studio to work on ABC’s ephocal Lexicon Of Love album, the beginning of a long and successful professional relationship with the uber-producer. ‘Date Stamp’ in particular shows Niles’ voice off to great effect.

From here on in, her career goes from strength to strength, but it’s not without its pitfalls: The Police’s long ‘Synchronicity’ world tour plays havoc with her vocal cords due to Sting’s insistence that she (and cohorts Dolette McDonald and Michelle Cobbs) sing in ‘full voice’ throughout, without any vibrato. There’s also a funny anecdote about what exactly constitutes an audition for Sting.

Then of course there’s Niles’ memorable, electrifying turn alongside David Bowie at Live Aid – it’s amazing that they only had two days’ rehearsal for the ‘little gig’, as Bowie called it.

Elsewhere, there’s lots of good technical stuff about what actually constitutes a decent studio vocal performance – and also what artists and producers demand from a backing vocalist – with wicked anecdotes concerning Tina Turner’s ‘What’s Love Got To Do With It’, Steve Winwood’s ‘Roll With It’, Duran’s ‘Notorious’ and Tears For Fears’ ‘Swords And Knives’. Niles also doesn’t shy away from personal reflections about her family relationships and romances.

There’s far too much Clapton and Robbie Williams for my liking and a decent proofreader wouldn’t have gone amiss, but I devoured ‘Backtrack’ almost in one sitting. A really enjoyable, gossipy read.

‘Backtrack’ is out now on Panoma Press.