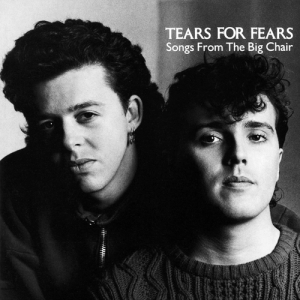 Recorded at The Wool Hall, Beckington, Somerset, and the Hammersmith Odeon, London

Peaked at #2 in the UK album chart

Reached #1 in the US album charts

Bassist/singer/co-writer Curt Smith explained the album’s title in a 1985 interview:

“The title was my idea. It’s a bit perverse but then you’ve got to understand our sense of humour. The ‘Big Chair’ idea is from this brilliant film called Sybil about a girl with 16 different personalities. She’d been tortured incredibly by her mother as a child and the only place she felt safe, the only time she could really be herself was when she was sitting in her analyst’s chair. She felt safe, comfortable and wasn’t using her different faces as a defence. It’s kind of an ‘up yours’ to the English music press who really fucked us up for a while. This is us now – and they can’t get at us anymore…”