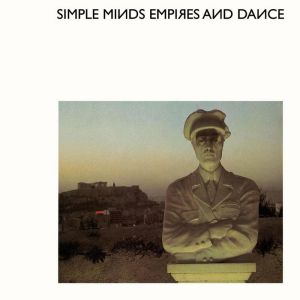 Before their mid-‘80s commercial peak, Simple Minds were an art-rock band par excellence.

They fitted perfectly into the post-punk landscape and on Empires And Dance, their third album, they certainly wore their influences boldly on their sleeve – Kraftwerk, Can, Roxy, Joy Division, Eno, Magazine, Velvet Underground, ‘Lodger’-era Bowie – but combined them exceptionally well.

While the one-chord grooves tire a bit on ‘Today I Died Again’, ‘Celebrate’ and ‘Capital City’, the Euro-funk of ‘I Travel’ and ‘This Fear of Gods’ chills the blood. ‘Twist/Run/Repulsion’ is almost an early example of sampling with its random speech, out-of-phase horn blasts and queasy, looped drums. Kerr channels Bowie’s ‘African Night Flight’ with his high-speed rap (though on the demo he took a different approach).

‘Thirty Frames a Second’ and ‘Constantinople Line’ almost approach the work of Throbbing Gristle and Gary Numan with their garish synth tones and forbidding atmospheres. ‘Kant Kino’, named after a Berlin art-house cinema, pits a slight but very catchy Charlie Burchill guitar melody against amplifier hiss, tape echo and synth drone; Eno would surely approve and the track was possibly an influence on U2’s ‘4th Of July’.

The closer ‘Room’ could almost have come from the first Velvet Underground album (though they could have done with playing to a click track; the song almost doubles in speed by the end…).

Empires And Dance peaked at 41 in the UK album charts. It might have gone higher had Arista Records pressed more than just 7,500 copies at a time. The band couldn’t get off that label fast enough (like Iggy Pop).

But Peter Gabriel became a major fan and took them on tour with him throughout October and November 1980, allegedly paying most of their expenses.