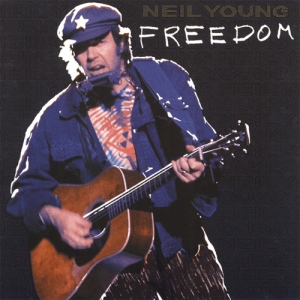 It’s probably fair to say that Neil had a dodgy old 1980s; at least that’s the critical consensus.

In 1983, he was sued by Geffen for delivering ‘unrepresentative’ albums.

But by 1988, he was back on his original label Reprise (Sinatra’s invention, natch) and had delivered This Note’s For You, ironically just the sort of record that had got him into such trouble at Geffen.

But it was the follow-up Freedom, released 30 years ago this week, that really got Neil back on track.

I don’t particularly dig country, but love ‘Hangin’ On A Limb’ and ‘The Ways Of Love’, simple heartfelt love songs (Linda Ronstadt’s contributions sure help). I don’t dig grunge, but I love ‘Don’t Cry’, ‘Rockin’ In The Free World and the raucous cover of Lieber and Stoller’s ‘On Broadway’.

So how does he do it? I’d cite four major differences between Young and the also-rans – intelligent lyrics, a great drummer, Neil’s sense of space and his lead guitar playing (‘Don’t Cry’ features a few of his most unhinged solos).

Of the former, the album’s title seems to refer to a few tracks’ investigation of freedom in Reagan’s America, especially the scarily prescient ‘Rockin’ (‘There’s a lot of people sayin’ we’d be better off dead/Don’t feel like Satan/But I am to them‘), epic ‘Crime In The City’ and Peckinpahesque ‘Eldorado’. ‘Rockin’ could almost be Young’s ‘Born In The USA’.

The gentler tracks arguably take one back to the feeling of freedom long before Reagan was around. This Note’s For You outtake ‘Someday’ – complete with chain-gang chanting and tubular bells – and the gorgeous ‘Wrecking Ball’ still sound like timeless classics, both romantic and anthemic.

Freedom was a gamechanger for Young, a near-perfect distillation of styles that would see him through the ’90s and beyond. It’s still an absolutely essential work and rightly seen as one of his greatest albums.

One thought on “Neil Young: Freedom 30 Years On”