Prefab Sprout’s 1988 album From Langley Park To Memphis was their pop breakthrough, reaching #5 in the UK charts, and is probably most casual fans’ favourite.

But let’s take a close look at the fifth track, the epic ‘Nightingales’. Featuring Stevie Wonder on harmonica and released as the fourth single from From Langley Park in November 1988, it remains one of Prefab’s most beguiling songs.

Written by Paddy McAloon under the influence of Barbra Streisand’s Broadway Album, it’s a stellar piece of work by any standards; melody, harmony and lyric are inextricably linked, as if the song had always existed and was just plucked out of the air.

It’s fair to say that by the time of From Langley Park’s recording, McAloon was becoming a proficient pianist; eight of ten songs on the album were written on keyboards, including ‘Nightingales’.

Its harmonic concept, with an emphasis on major-seventh chords (including an audacious jump from F#m7 to Cmaj7 in bars four and five of the chorus) and triads superimposed over apparently unrelated root notes, possibly reveals a Brian Wilson influence, but the final effect is more Stephen Sondheim than ‘Surf’s Up’.

‘Nightingales’ also has no apparent antecedents in the 1980s pop firmament, though, at a stretch, approaches one of Green Gartside and David Gamson’s gossamer Scritti Politti ballads.

In a year when Acid House and the ‘Madchester’ sound were gestating and Stock Aitken Waterman ruled the charts, McAloon delivered something unabashedly romantic and somewhat old-fashioned; the opening line (‘Tell me do, something true‘) and general tenor of the lyric are more akin to ‘Daisy Bell’ than anything by the Stone Roses (and Paddy made no secret of his general distaste for late-’80s pop).

The song’s protagonist analyses his love affair, asking his paramour whether their love is fleeting like a ‘firework show’ or whether it’s a lasting, valuable entity. They agree that such questions are unhelpful and/or irrelevant – the key is to live in the moment.

‘Nightingales’ was co-produced by Jon Kelly and McAloon. By 1987, London-born Kelly was an experienced, highly-regarded producer and engineer, probably best known as one of Kate Bush’s key early collaborators on the classic 1980 album Never For Ever.

By the time of the first chorus, sampled sleigh bells and silky Synclavier drums are added to the mix alongside McAloon’s rather incongruous but effective (sampled?) banjo.

Robin Smith’s widescreen string arrangement becomes increasingly prominent throughout the track; particularly notable is a flurry of ascending, almost celestial notes in three distinct phases beginning at 2:14 (and check out the rustle of fake locusts at 4:26!).

Stevie Wonder had long been a hero of McAloon’s, the album Journey Through The Secret Life Of Plants being a particular favourite. Mentioning as much to Prefab manager Keith Armstrong one day, Paddy half-joked that a Stevie harmonica solo on ‘Nightingales’ would really bring the track to life.

Armstrong stunned McAloon by informing him that he was a good friend of Wonder’s operations manager Keith Harris and would put in a good word for the band (it’s also worth noting that Wonder played some sublime harmonica on Thomas Dolby’s ‘Don’t Turn Away’ a year before the recording of ‘Nightingales’ – perhaps Thomas gave the band a good reference…).

Wonder’s harmonica solo was recorded in a very rushed session during September 1987 at Westside Studios in Notting Hill, West London.

He apparently learnt the song quickly, disappearing into a corner of the studio with a rough mix on his Walkman, and then recorded two takes in the lower octave and two in the higher. The released solo is a composite of the four.

Richard Moakes was the young engineer tasked with capturing Wonder’s solo on tape. According to McAloon:

He (Moakes) looked at me and said, ‘Oh God, I’m a bit worried I won’t know how to get his sound’. I said, ‘Well, look, we’ll just see what happens’. And of course you put the microphone on him and you turn the fader up and he sounds like Stevie Wonder. You don’t do anything. Unless you’re doing something really silly, you’ll get it and it will be identifiable. So I thought, OK, when you play a guitar, don’t blame an engineer if you don’t know what you’re doing… 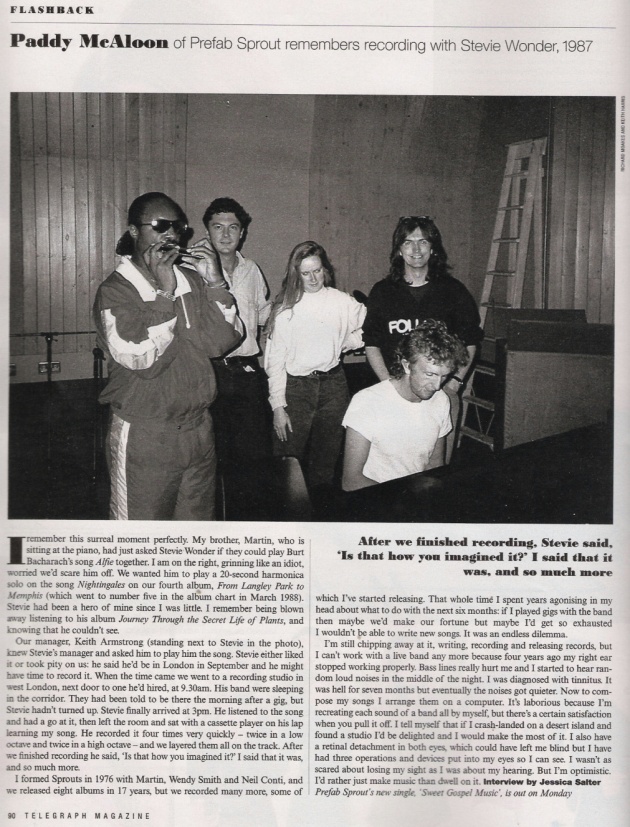 New York mix engineer Michael Brauer cooked up the 12” version of ‘Nightingales’. He made some drastic changes from the 7” single, placing the sleigh bells right at the front of the mix, reinstating some of Wendy Smith’s stacked backing vocals originally left on the cutting room floor, stripping McAloon’s lead vocal of its reverb (though adding a lot more to the snare drum) and leaving more space for Smith’s string arrangement and McAloon’s banjo.

A video was also made, though it’s almost impossible to track down these days – never a sure sign of quality…