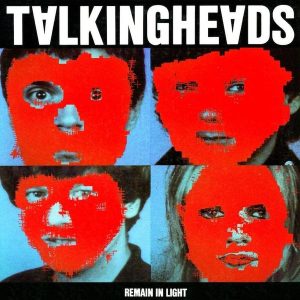 For many Americans, 1980 hoped to offer a break from the recent past: the Watergate scandal, defeat in Vietnam, the Iran hostage crisis, a major recession. Disco.

A Presidential Election was also pending in November. At the beginning of the year, Jimmy Carter stood at 62% in the polls, Ronald Reagan at 33.

Reagan promised to return America to a pre-countercultural era, prioritising family values and social order. He courted the Fundamentalist vote; evangelists and motivational speakers suddenly popped up all over the radio.

Something pinged in David Byrne’s head, and he later outlined the febrile atmosphere of early 1980 in Simon Reynolds’ book ‘Totally Wired’: ‘The text was saying “Thou shalt not” but the preacher’s performance was this completely sensual, sexual thing. I thought, “This is great – the whole conflict is embodied right there…”’

Byrne and Brian Eno explored some of these themes on their groundbreaking My Life In The Bush Of Ghosts (named after the 1954 book by Nigerian writer Amos Tutuola) with a particular emphasis on Islam and its contrasts with Christianity.

The project was originally supposed to be a three-way collaboration between Jon Hassell, Eno and Byrne, a fake ‘field work’ complete with ethnography, liner notes and photos, but Hassell dropped out at the eleventh hour. The album is strikingly original, still relevant and sometimes terrifying.

A month before the Presidential Election, on 8 October 1980, Talking Heads released their masterpiece Remain In Light, also a collaboration with Eno. The album’s key tracks, ‘Once In A Lifetime’ and ‘Listening Wind’, went even further than Bush Of Ghosts: the former showed that Byrne had completely assimilated the ‘sensual preacher’ persona, while the latter outlined a young Arab’s act of terror.

Mojique resents the rich ‘foreigners in fancy houses’ turning up in his country, makes a bomb ‘with quivering hands’ and dispatches it to his American enemy. It’s a unique, powerful piece of work, and one wonders whether its inclusion on Remain In Light contributed to the album being their worst-ever seller in the USA.

Reagan was elected on 4 November 1980 with 50.7% of the national vote. His famous Election Eve speech mentioned ‘that shining city on the hill’, invoking both Jesus’s Sermon On The Mount and noted Puritan John Winthrop. But Byrne’s New York had been under the cosh: more murders, robberies, burglaries and subway breakdowns were reported in 1980 than in any other year since records began 49 years earlier.

Reagan was inaugurated on 20 January 1981. My Life In The Bush Of Ghosts was finally released – after several postponements – almost exactly a month later.

Further reading: ‘Life And Death On The New York Dancefloor’ by Tim Lawrence