If you read the press blurb about Stump, the general consensus seems to be that they didn’t quite ‘make it’. But rather we should probably be thankful that they got it together for as long as they did.

The Anglo-Irish band made me smile (and continue to do so), released a great mini album (Quirk Out) and one full-length one, A Fierce Pancake. Released 30 years old today, the latter is probably in my ’80s top 10 (and is reportedly one of Faith No More/Mr Bungle frontman Mike Patton’s favourites too).

It was never going to be easy: the drummer (Rob McKahey) sounded like he belonged in Beefheart’s Magic Band or Ornette Coleman’s Prime Time, the fretless bassist (Kev Hopper) was into sampling, Pere Ubu and Brand X, the guitarist (Chris Salmon) sounded like a cross between Hank Marvin and Adrian Belew and brilliant frontman/lyricist (the late Mick Lynch) was more than likely to engage in a bit of onstage belly dancing.

But it somehow works. A Fierce Pancake is dedicated to the life and works of physician/psychoanalyst Wilhelm Reich and writer Flann O’Brien. It was released on Ensign Records, mainly known for breaking Irish acts like Sinead O’Connor and the Waterboys. Recording sessions at Hansa in Berlin were apparently long and difficult – original producer Holger Hiller jumped ship halfway through and then ‘stabilising influence’ engineer Stephen Street got summoned away to work with Morrissey.

But the album’s sometimes hilarious (‘Bone’, ‘Charlton Heston’, ‘Chaos’, ‘Eager Bereaver’), sometimes touching (‘Alcohol’, ‘Boggy Home’) and always musically interesting. I think of it as something like a cross between Viz magazine and XTC. It’s a shame that they couldn’t maintain the John Peel-endorsed momentum of their early days. 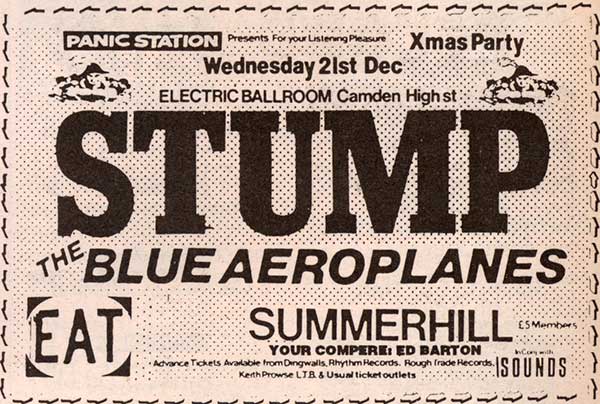 Their manager persuaded them to call it a day after a disastrous Camden Electric Ballroom gig supported by The Blue Aeroplanes on 21st December 1988. A Fierce Pancake hadn’t come close to recouping its costs and the Rave scene was in full flow. It was all over, barring a one-off comeback gig in May 2015.

For more on the band, check out this excellent podcast.