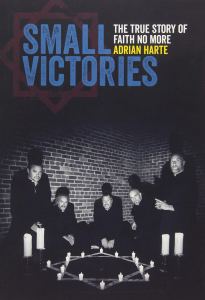 It’s sometimes forgotten the influence Faith No More had as an alternative rock band. Long before Nirvana, Sonic Youth and Red Hot Chili Peppers’ breakthrough, they were really the first viable, commercial alternative to the hair metal and retro bands of the mid-’80s.

Adrian Harte’s new biography of the band is a fascinating document of a very strange career. They are certainly not your normal rock outfit; that’s made pretty clear when Harte – a trusted friend of the band and founder of newfaithnomore.com – picks up the story of Faith No More’s two co-founders, keyboard player Roddy Bottum and bassist Billy Gould, a couple of music-mad rich kids ‘enjoying’ a Catholic education at a Jesuit grammar school in Los Angeles.

Inspired by the West Coast and London post-punk scenes (I’m pleased to say that one of their formative gig experiences was seeing a double-header of 23 Skidoo and This Heat at the Battersea Arts Centre, of all places…), they quickly pick up a large local following and garner interest from various labels including Adrian Sherwood’s On-U Sound.

Adding drummer Mike Bordin is a huge catalyst, and he rivals Rush’s Neil Peart as one of the more intelligent skin-bashers in modern rock – he studied English literature at UC Berkeley, reporting: ‘My specialities were Middle English like Chaucer and Edmund Spenser, and I even liked Shakespeare a lot. To graduate, I did a thesis on Richard Wright, the African-American novelist.’ Mick Shrimpton he ain’t.

Vocalist/frontman Chuck Mosley is the next key addition, and he emerges as the great pioneer of the scene. Harte doesn’t shy away from the political/racial issues ignited by recruiting a mixed-race frontman, but happily is more interested in what Mosley brings to the table both musically and lyrically – he reports that the band’s ‘meta’ ideas (encapsulated by the tracks ‘We Care A Lot’ and ‘Introduce Yourself’) are mainly Mosley’s contributions. We also learn about the roots of rap/rock, Mosley saying that he was ‘trying to imitate David Bowie, but also there was other stuff I didn’t understand, so I would rant and rap over it. I was black and white, so it was my two worlds together.’

The UK was Faith No More’s first major market, but we learn that their Dingwalls debut in early 1988 was almost terminally scuppered when the keyboard roadie locked Bottum’s synth in its case and left the key back at the hotel across town – Roddy had to get the tube to retrieve it, drawing stares with his newly-shaved head and white paper jumpsuit.

After various incidents and misunderstandings, Mosley was sacked from Faith No More after a 24th May 1988 gig at London’s Town & Country Club, and then the band remembered a young kid from Eureka, California, who had thrust his Mr Bungle demo tape into Gould’s hands the year before. But we learn that Mike Patton certainly wasn’t a shoo-in, with the management far keener than the band to recruit him. Gould says: ‘I was scared we were gonna ruin this kid’s life. He was like Justin Bieber.’ Patton was the all-American kid from who’d never been on a plane before. But after he auditioned, adding his lyrics and melodies to ‘From Out Of Nowhere’, they knew they had their man.

Harte’s analysis of Patton’s contribution to the band is excellent, with particular emphasis on his melodies and lyrics (the latter spawning the beginnings of record-company discontent, producer/Slash Records employee Matt Wallace forcing him to tone down his original words for ‘Underwater Love’). And who knew that ‘Midlife Crisis’ was a first-rate – if somewhat disturbing – song about co-dependency (‘You’re perfect/Yes it’s true/But without me you’re only you/Your menstruating heart/It ain’t bleeding enough for two‘)?

We learn all about the band’s high-profile – and sometimes hilarious – support gigs with rock behemoths Guns N’ Roses and Metallica, and there’s also a gripping account of the Berlin gig during which Patton announced the falling of the Wall. If stats are your bag, Harte provides all the impressive info about the band’s record sales and chart placings, and he also expertly accompanies us through the band’s mid-’90s burnout (even as the quality of their records seemed to be increasing), 2009 reunion tour and subsequent comeback album.

‘Small Victories’ is a real page-turner, highly recommended to long-time fans of the band but also general fans of ’80s/’90s music.