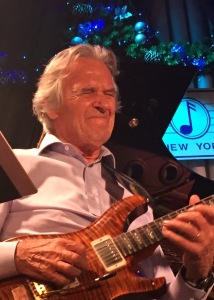 If this was John’s final London gig, what a way to go out.

Though the audience’s response was at times reverential and/or strangely undemonstrative, the outpouring of emotion at the conclusion was heartfelt and seemed to come as quite a shock to the performers too.

It’s hard to think of another ‘jazz’ band which has endured for so long with the same personnel as The 4th Dimension.

Tonight was no exception, though there was a much larger dose of spiritual jazz than usual, courtesy of not one but two Pharoah Sanders covers: ‘The Creator Has A Master Plan’ and ‘Light At The Edge Of The World’. You could take or leave the slightly dodgy band singing, but the message of love and understanding was powerful and still relevant.

One can also take or leave John’s guitar tone these days (sometimes one wishes for a far less ‘refined’ sound), but his playing sounded back to its brilliant, fluid, lyrical best tonight, a little like his return to the electric in 1978 after the long acoustic sojourn in Shakti.

And if the mood of the evening’s music was generally uplifting, with new takes on the frenetic modern classic ‘Hijacked’, Mahavishnu favourite ‘Trilogy’ and raunchy ‘Echoes From Then’, ‘Gaza City’ was heartfelt and touching, a lament for a lost place.

Just a few gripes: one occasionally hankered after another soloing foil for John, an L Shankar or Gary Thomas; this music asks a hell of a lot from Husband and Barot.

Also, listening to the latter’s ‘hit everything all the time’ ethos (though his konakkol vocal/rhythmic interludes are always fascinating), one realised what a tasteful, selective drummer Dennis Chambers had been during the ’90s organ trio/’Heart Of Things’ era.

John started the evening heralding a slight return not to Great Britain but to ‘Great Brexit’, and ended it with a gentle: ‘You’re all one. Thank you’. A powerful, important concert, especially if we don’t see him on a British stage again.