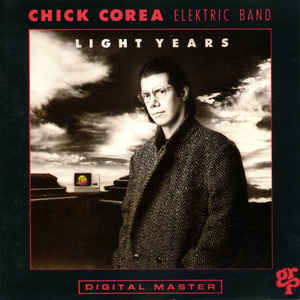 Jazz/fusion of the late-’80s variety is sure to give any John Peel acolyte nightmares: visions of guys in tracksuit bottoms, trainers and vests, looking like extras from ‘Thirtysomething’, playing absurdly gymnastic jazz/rock based on corny ‘funk’ or Latin vamps, grinning at each other and the audience, using the cheesiest modern gizmos (Simmons electric drums, EWI wind instruments, guitar synths).

He reins in the chops and gothic longeurs to produce a collection of really good themes and tight, attractive arrangements (though the three ‘extra’ tracks on the CD/streaming versions are disaster areas). The album is also musical catnip for me, bringing back memories of when I was first getting into jazz and fusion.

The thing is that Chick seems to actually relish including some pentatonic/blues-based harmony on Light Years. Some of his playing wouldn’t seem out of place in the music of Will Downing or Lonnie Liston Smith. There are even a few II-V-I chord changes.

‘Starlight’ and the title track are as catchy and immediate as David Sanborn’s ‘Run For Cover’ or ‘Hideaway’, though Marienthal’s alto tone is a bit too close to Dave’s for comfort. Weckl delivers lesson after lesson in Latin-flavoured funk and rock drumming. Gambale and Patitucci barely break sweat, or rather don’t get any room to show off, but still make a few telling contributions.

‘Time Track’ and ‘View From The Outside’ demonstrate everything that’s good about Light Years – catchy melodies, cool grooves and meticulous, gradually-escalating arrangements. The ridiculously technical last four bars of the former demonstrate some of the killer musical chops that are kept pretty much in the locker throughout the album, only to be brought out when strictly necessary. I saw them live a couple of times around this time and of course the musicianship was incredible, even if the relentlessly ‘up’ stage presentation now looks pretty embarrassing.

Light Years is obviously good. It’s brutally, clinically good. It’s almost critic-proof. The Elektric Band were the Level 42 of high-octane fusion and this album is their World Machine. Of course it’ll always sound a bit like muzak to some, but that’s quite cool too.

The CD’s inlay card features a really weird poem by Chick, kind of an ode to Scientology. It’s worth reading. And actually the album cover is pretty strange too when you think about it…