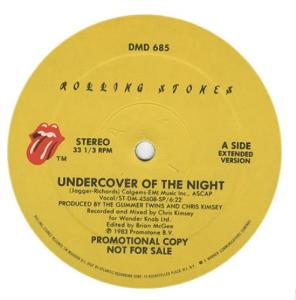 So here it is: The Stones’ last great single. ‘Undercover’ is essentially a one-chord groove with powerful lyrics, stinging guitar licks, a memorable hook and notable video.

Though Mick and Keef share a writing credit, the song was apparently largely a Jagger composition, with Richards later saying: ‘Mick had this one all mapped out. I just played on it. There was a lot more separation in the way we were recording at that time. Mick and I were starting to come to loggerheads…’ Guitarist Ronnie Wood concurred but also had reservations: ‘There was a great acoustic version which is the kind of song it should be. The final, polished version may have been Mick’s vision of the song…’

Reading between the lines, Jagger was clearly keen to bring outside players into an increasingly dysfunctional band situation. Recording took place during the summer of 1983 at Compass Point Studios in Nassau, giving Jagger the opportunity of using some great local players, many of whom light up ‘Undercover Of The Night’.

A raft of percussionists including Sly Dunbar, Martin Ditcham, Moustapha Cisse and Brahms Coundoul accompany drummer Charlie Watts on various instruments including bongos, Simmons drum and even a timpani (there are rumours that a complete different version of the song exists featuring a rhythm section of Sly and Robbie). Producer Chris Kimsey also enters into the spirit of things with an ingenious ‘dub’-style arrangement (or is that the work of Brian McGee, credited as ‘editor’ on the vinyl label?).

Jagger claimed that his lyric was heavily influenced by William Burroughs’ 1981 novel ‘Cities Of The Red Night’. The song is a disturbing vision of Latin America’s dirty war. This was, after all, an era in which thousands of ‘political prisoners’ were tortured and killed in the ESMA detention camp in Buenos Aires, less than a mile from the stadium where the 1978 football World Cup Final was taking place (according to many reports, the cheers of the fans obscured the screams of suffering prisoners).

Excellent documentary ‘The Shock Doctrine’ claims that many torture techniques used by the Chilean and Argentinian junta (including rape and genital mutilation) may have been ‘learned’ in the US-run School Of The Americas. Jagger manages to crystallise many of these disturbing aspects in a powerful lyric:

All the young men, they’ve been rounded up
And sent to camps back in the jungle
And people whisper, people double-talk
And once-proud fathers act so humble
All the young girls they have got the blues
They’re heading on back to Centre 42

Down in the bars, the girls are painted blue
Done up in lace, done up in rubber
The johns are jerky little GI Joes
On R&R from Cuba and Russia
The smell of sex, the smell of suicide
All these sweet things I can’t keep inside

Undercover, all out of sight
Undercover of the night

Julien Temple directed the controversial video, shot in Mexico City. As he relayed in ‘I Want My MTV’, his dealings with Jagger and Richards gave him a pretty stark insight into the state of their relationship:

‘I wrote an extreme treatment about being in the middle of an urban revolution, and dramatised the notion of Keith and Mick really not liking each other by having Keith kill Mick in the video. I never thought they would do it. Of course they loved it. I went to Paris to meet with the band. Keith was looking particularly unhappy. He was glowering with menace and eventually said, “Come downstairs with me.” My producer and I went down to the men’s room. Keith had a walking stick and suddenly he pulled it apart. The next thing I know he’s holding a swordstick to my throat. He said, “I want to be in the video more than I am.” So we wrote up his part a bit more. That was Keith’s idea of collaboration!’

The video was initially considered too violent for MTV (though they did eventually air an edited version after 9pm) and it was heavily censored when shown on British television, leading to a fractious interview on ‘The Tube‘ during which presenter Muriel Gray questioned Jagger and Temple about the extreme content and their motives for making the video.

‘Undercover Of The Night’ was released as the first single from the accompanying Undercover album on 1st November 1983. It got to number 9 in the US singles chart and 11 in the UK – not bad. No Stones single has gone higher since.