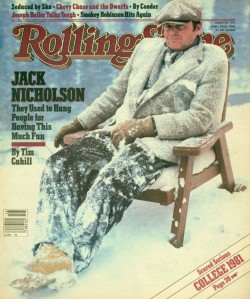 What’s the first image that comes to mind when we think of 1980s Jack?

Leering through the bathroom door in ‘The Shining’, or tearing up the furniture in ‘Batman’ and ‘The Witches Of Eastwick’?

We probably wouldn’t think of a sober, suited-and-booted man about the arts, but that’s exactly what we get in a recently-discovered BBC interview.

It took place on 18th January 1982 during his ‘year off’ after an intensive period of work on ‘Reds’, ‘The Shining’, ‘The Border’ and ‘The Postman Always Rings Twice’, and makes for fascinating viewing.

There’s certainly an element of him being on his ‘best BBC behaviour’, aided by Ian Johnstone’s austere interviewing style, but it demonstrates how Jack could so convincingly pull off the brilliant but troubled classical piano prodigy Bobby Dupea in ‘Five Easy Pieces’ (a part written for him by Carole Eastman, whom he discusses below).

It also shows how brilliantly he can ‘dial down’ his IQ to conjure hellraising characters like McMurphy in ‘One Flew Over The Cuckoo’s Nest’. And, frankly, reveals why someone of Anjelica Huston’s calibre would enjoy his company so much. Next up was his Oscar-winning turn in ‘Terms Of Endearment’ – the year off certainly paid dividends.