It seems a bit weird to describe ‘Seems Like Old Times’ as a cult movie when everything about it screams ‘Hollywood’: co-stars Chevy Chase and Goldie Hawn, screenwriter Neil Simon, ‘Mary Tyler Moore’/’Cosby Show’ director Jay Sandrich, Columbia Pictures (this was one of the first movies they made after the David Begelman embezzlement scandal).

But it’s a cult movie in that it now seems completely forgotten. I probably would never have come across it unless I’d happened upon it on TV one afternoon.

I stuck it on a VHS and wish I still had it, because it’s one of Chevy’s funniest films and an interesting companion piece to ‘Caddyshack’. 1980 was a good year for Steely Dan’s first drummer.

‘Seems Like Old Times’ is clearly modelled on the great Hollywood screwball comedies of the ’30s and ’40s. Even the title comes from a popular song written in 1945 (sung by Diane Keaton in ‘Annie Hall’).

Chase stars as a falsely-accused bankrobber who takes refuge at his ex-wife’s Beverly Hills ranch. There are ‘unresolved issues’ in their relationship, not to mention the suspicions of Hawn’s new husband Charles Grodin. The sparks fly and the one-liners come thick and fast. 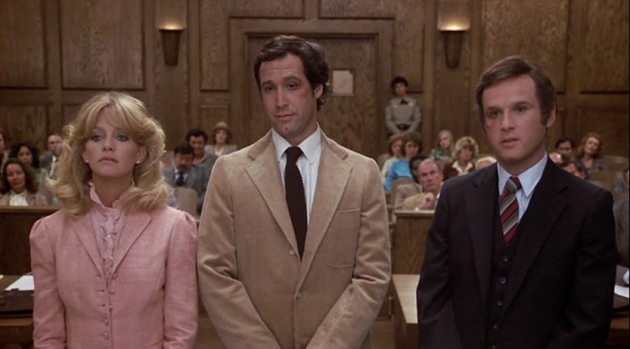 Chase channels Cary Grant at his zaniest, Hawn is fairly adorable and has some great comic moments, and they have a decent chemistry.

Grodin (who I was amazed to read was Razzie-nominated for this performance) excels in the role he always seems to play, a control freak seemingly on the edge of a nervous breakdown, while Robert Guillaume and Harold Gould lampoon the Reaganite elite almost as effectively as Ted Knight in ‘Caddyshack’.

Simon writes loads of memorable secondary characters too: TK Carter is funny as Chester (though the part wouldn’t win any ‘woke’ points these days) and Yvonne Wilder is great as Mexican maid Aurora (ditto). The locations are gorgeous, with a striking helicopter shot over the opening credits along the Southern California coast.

I love Marvin Hamlisch’s theme tune too, sounding a bit like Herb Alpert jamming with Billy Joel. And the cheap, slushy, ridiculous last five minutes get me every time.

‘Seems Like Old Times’ is a film that you can just let wash over you – you’re in the hands of experts. Indeed it sometimes feels a bit too professional. It was a reasonable hit but proved a bit of a career dead end for Chase, who pretty much eschewed the ‘romantic lead’ pictures from here on in. A shame, in a way. His dead-eyed buffoonery and surprisingly subtle charm take him and the film a long way.