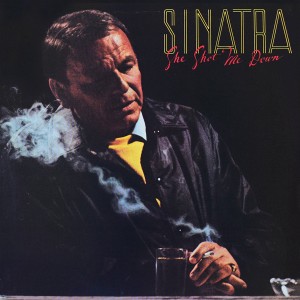 It’s probably not much of a surprise that Frank didn’t exactly thrive in the 1980s, but it’s funny thinking of She Shot Me Down, released 40 years ago this month, touching down in a landscape of AOR, yacht rock and new wave.

It was his penultimate solo studio album (the last was 1984’s Quincy Jones-produced LA Is My Lady) and the last he made for his own Reprise label (still extant and still a subsidiary of Warners).

It has its fans (esteemed jazz writer Gary Giddins called it ‘his last great album’) but is generally considered only a partial success. I’d agree with that. Sinatra’s majestic voice falters, and is subject to an uncharacteristically poor recording/mixing job: he’s generally mixed much too high with a ‘room’ reverb that quickly grates.

The grim album cover design doesn’t help either. But She Shot Me Down does feature four absolute classics that easily compare with his greatest work of the 1950s, regretful portraits of lost love that suit his world-weary voice perfectly.

‘Going Going Gone’, penned by the recently departed Stephen Sondheim from the musical ‘Merrily We Roll Along’, features a sumptuous melody and witty lyric, easily transcending its wafer-thin ‘rock’ arrangement.

‘Thanks For The Memory’, originally written in 1938 and famously Bob Hope’s signature tune, features some nice updated lyrics by Leo Robin that perfectly suit the occasion (‘Thanks for the memory/Of letters I destroyed/Books that we enjoyed/Tonight the way things look I need a book by Sigmund Freud’ etc.).

‘Monday Morning Quarterback’ is a superb co-write by producer Don Costa. But Gordon Jenkins’ ‘I Loved Her’ may be the album’s standout. He was of course a frequent Sinatra arranger of note and occasional composer (‘Good-Bye’), but this is his best song, a tragic tale of a mismatched couple that we can all relate to.

The faltering piano solo (played by Sinatra?) perfectly conjures up the feeling of bar-room regret, and Sinatra’s pronunciations of ‘pie’, ‘movies’, ‘Dodgers’, ‘noon’ and ‘saloon’ linger long in the memory.

Frank, Gordon and Stephen: good-bye and thank you.