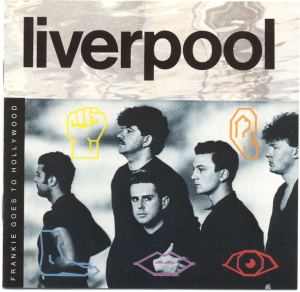 It’s well known that FGTH’s deal with ZTT was one of the worst recording contracts in pop history (outlined in embarrassing detail in vocalist Holly Johnson’s ‘A Bone In My Flute’ autobiography).

But the band were already starting to show signs of subordination by late 1984 – they refused to record the Velvet Underground’s ‘Heroin’ as the B-side to ‘The Power Of Love’, part of ZTT ideas man Paul Morley’s bizarre plan* to get the label’s acts to write a history of pop through cover versions.

FGTH also scuppered ZTT’s plan for them to star in a sci-fi movie which was to be scripted by Martin Amis and directed by Nicolas Roeg (actually, that sounds brilliant…).

The band then insisted that they actually play on their second album Liverpool rather than let session players lay down the basic tracks, a request that seems to have been granted. Guest players this time were few and far-between, and it’s quite hard to identify Trevor Rabin, Steve Howe and Lol Creme.

Sensing trouble, Trevor Horn took the role of ‘executive producer’ and passed production duties over to the gifted Stephen Lipson, who clearly had his work cut out. A schism was opening up between Holly Johnson and the rest of the band, or ‘The Lads’, as he dubbed them (Lipson discusses the making of Liverpool in this excellent podcast).

Tensions were also running high in the UK – by mid 1986, unemployment had topped three million and anti-Thatcher feeling had reached its peak. Oxford University refused her an honorary degree. So the frivolity and epicurean excesses of Welcome To The Pleasuredome were definitely out. 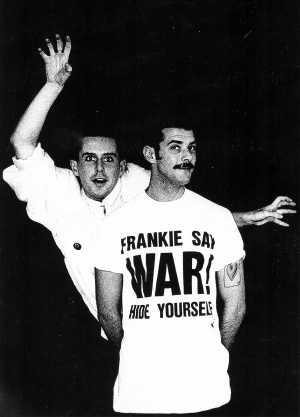 Still, Liverpool is a sumptuous-sounding album, with immense care taken over recording, mixing and mastering – apparently to the tune of a whopping £760,000.

It stands up pretty well today especially if taken as a separate entity to Pleasuredome, even if the songs – not surprisingly – are not as memorable as the debut’s.

Lipson pulls out all the stops, playing some superb fuzz-toned lead guitar, particularly on ‘Maximum Joy’ and ‘Rage Hard’, and piecing together an album of musically-rich, prog-influenced hard rock.

And though Liverpool is obviously a more ‘serious’ album than Frankie’s debut, there are still amusing spoken-word inserts in broad Scouse (‘In the common age of automation, where people might eventually work ten or twenty hours a week, man for the first time will be forced to confront himself with the true spiritual problems of livin”!).

‘Warriors Of The Wasteland’, ‘Rage Hard’ and ‘Kill The Pain’ are tough techno-rock tracks which wouldn’t have sounded out of place on It Bites’ debut album. ‘Rage Hard’ was also subjected to a fantastically overblown extended mix featuring Pamela Stephenson (doing her best Thatcher impersonation?) taking us on a tour of the 12” single.

‘Maximum Joy’ is superb; pure ZTT bliss, while ‘Lunar Bay’ is also brilliant, balls-out prog/pop in the style of Propaganda’s A Secret Wish.

‘For Heaven’s Sake’ is a completely barmy anti-Thatcher ballad (‘She should buy us all a drink’) in queasy 6/8 time, featuring a melody that wouldn’t be out of place in a classic Broadway musical, some Native American chanting by Holly and a weird music-hall middle section.

‘Is Anybody Out There’ is a fitting end to Frankie’s recording career, a majestic, distinctly Suede-like ballad (the guitar solo is totally Bernard Butler) with some beautiful Holly vocals and a subtle Richard Niles string arrangement.

The album was not a commercial disaster, reaching #5 in the UK album chart and the top 10 in many other European countries, but a disappointing #88 in the US. And Thatcher still had four years left in Downing Street.

*Morley’s influence was apparently running amok, evidenced by Liverpool‘s fairly ridiculous liner notes (‘Best wishes to Stan Boardman’) and a choice of album title that suggested he was pretty certain the band would soon be returning to their hometown, banished from pop’s high table. Holly apparently hated the title…