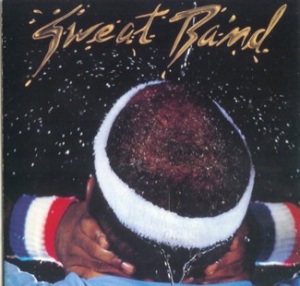 There must be a huge cache of unreleased material in the George Clinton vaults – we’re probably talking Prince/James Brown/Frank Zappa amounts here.

And will it be Warners, BMG or Universal who get control of his recorded legacy (unless the deal has already been done…)?

As it is, you could probably spend a lifetime listening to his existing work. And just when you think you’ve got a handle on it, new things keep trickling through, like Sweat Band’s self-titled 1980 debut album.

The P-Funk side project, mainly written and performed by Bootsy Collins and Maceo Parker and recorded at United Sound Studios in Detroit, was the first release on Clinton’s short-lived Uncle Jam label, distributed by CBS.

In truth the album is very patchy (not helped by the cover which probably should have made my worst of the 1980s list) and shows the decline also encountered by Parliament/Funkadelic and Bootsy (whose Ultra Wave was released in the same week) around the same period, when funk was getting watered down by disco and commercial R’n’B.

But the track ‘Jamaica’ is brilliant. It’s gone straight into my 1980s Funk playlist with a bullet. It features legendary London music writer Lloyd Bradley (credited as Lloyd Bridges) talking rubbish all over it plus a seriously arse-over-teacup groove, catchy chants, underwater bass and fantastic horns.

And is that an uncredited Harvey Mason on drums? It sure sounds like him. Bring on the Clinton vaults if there’s a lot more like this lying around.