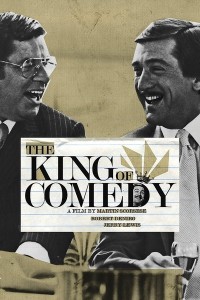 Looking at the trailer and publicity for James Franco’s Tommy Wiseau biopic ‘The Disaster Artist’, it’s hard to ignore the ‘King Of Comedy’ comparisons.

If Wiseau didn’t actually exist, Hollywood would probably have to invent him. Recent American cinema is full of Wiseaus and Pupkins – desperate characters, probably a few cards short of a full deck, who will do almost anything to make it.

Pupkin passive-aggressively stalks celebrities for their autographs, but then comes to believe that he is owed a shot at fame. Talk-show host Jerry Langford (Jerry Lewis) is his passport to success – Pupkin and disturbed rich-girl Masha, brilliant played by Sandra Bernhard, kidnap him. Pupkin then demands the opening monologue on Langford’s nightly TV show. 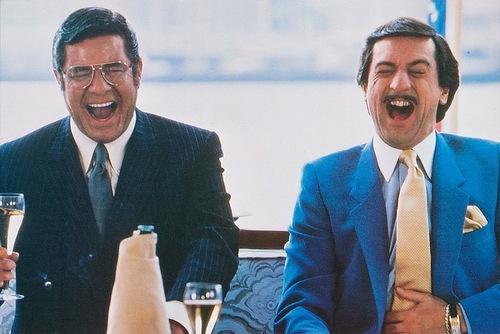 If ‘The King Of Comedy’ had been made today, it would probably be hailed as a modern classic, a fable for our times, a coruscating attack on narcissism, celebrity culture and unchecked ambition.

It’s ‘Nightcrawler’ meets ‘Curb Your Enthusiasm’. But it stiffed on its original release (not helped by a substandard trailer – see below), grossing barely $3 million against a $19 million budget.

The studio didn’t know how to market it, trying to sell it as a knockabout comedy. Scorsese sensed the bad vibes gathering around the film long before it was released, telling writer Peter Biskind, ‘A close friend of mine told me “The buzz is bad.” I hate that. When the buzz is bad, people don’t want to be associated with the picture. But they were right – the film was a bomb. It’s called “The King Of Comedy”, it’s Jerry Lewis, and it’s not a comedy. Already it’s a problem…’

Yes, it sometimes feels like a succession of skits strung together, almost in the style of Brian De Palma’s early films ‘Greetings’ and ‘Hi Mom’. And it would be nice to get a bit more access to Pupkin and Masha’s backgrounds.

Scorsese fills the screen with significant minor characters, mainly playing themselves and recruited from the ‘real’ TV world, and he obviously has deep respect for Lewis and all he stands for (though has less respect for the all-pervading, gossipy influence of TV culture).

Bernhard, prodded by De Niro, is superb, given free rein by Scorsese to improvise freely: ‘I cover the waterfront, remember that!’ she bawls at Pupkin, just before one of the director’s typically bracing cuts.

There are many excruciating moments: Pupkin’s arrival at the Langford house (De Niro apparently screamed antisemitic abuse at Lewis to elicit the correct level of outrage in his response to having his golf game interrupted) and Masha’s ‘seduction’ of Langford. Is his violence towards her ‘justified’?

And then there’s Pupkin’s monologue, shown in one long take with no cutaways – Scorsese and De Niro dare us to laugh at this schmuck, and it’s unsettling when one or two of his gags hit the spot.

‘The King Of Comedy’ is the De Niro/Scorsese collaboration I return to the most. Nobody gets killed, but a lot of people get hurt. Very hurt indeed.

And it bears repeated viewings: recently I noticed an intruder in the restaurant scene where Pupkin tries to persuade his ‘girlfriend’ Rita to accompany him to Langford’s. Check him out. He’s behind Pupkin, mocking him throughout. I take it he’s supposed to stand in for the entire film-going audience.