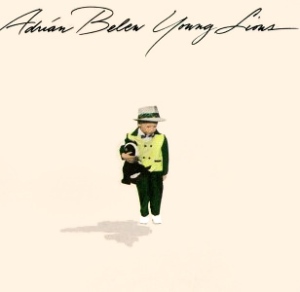 One can get caught up revisiting the ‘lost’ periods of the truly great artists of the last 50 years – Miles, Neil Young, Bowie, Dylan, Zappa, whoever.

At the moment, it’s Bowie’s late-’80s and early-’90s that particularly intrigue, roughly the period from ‘Intruders At The Palace’ to Tin Machine II.

There was a lot more to the era than Tin Machine. ‘Pretty Pink Rose’, a song Bowie had originally demo’d in early 1988 with members of Bryan Adams’ band (and one later rejected by TM, though one can hear echoes of it in their cover of Roxy Music’s ‘If There Is Something’), generally gets a bum rap but features some classic Bowie moves, like the descending, superbly-sung bridge and ‘secret’ chord also heard in ‘Absolute Beginners’ and ‘Loving The Alien’.

Bowie rang Belew on 4th August 1989 asking him to play guitar and take the role of musical director on the ‘Sound + Vision’ greatest hits tour. But Belew owed Atlantic Records a solo album, the one that eventually became 1990’s Young Lions. Bowie offered to pitch in with ‘Pretty Pink Rose’. Apparently Belew was initially less than enamoured, but grew to love it.

Belew recorded the backing tracks on 11th November 1989 at Royal Recorders near Lake Geneva in Wisconsin, playing all instruments. He achieves a great garage-rock sound with sprightly bass, Leslie-toned rhythm guitars and some mad lead playing courtesy of a Fender Strat wired with a Kahler tremolo arm that he found could be ‘tapped’ on the neck instead of using his finger tips.

Bowie and Belew recorded their duet vocals (at the same mic – apparently Belew was unexpectedly starstruck) on 15th January 1990 at Right Track in NYC (Bowie recorded his spontaneous vocals for ‘Gunman’ on the same day). Apparently a spoken-word intro was later excised, which featured Bowie intoning: ‘She had tits like melons… It was love in the rain’!

‘Pretty Pink Rose’ was released a single in May 1990 but inexplicably missed the top 40 in both the US and UK, despite regular MTV screenings of the Tim Pope-directed video featuring Bowie and Belew hamming it up with ‘Life And Loves Of A She-Devil’ star Julie T Wallace.

Bowie and Belew also played it every night on the ‘Sound + Vision’ tour, augmented by some great chord additions by keyboardist Rick Fox. It looks like they were having a lot of fun. It’s a cracking song and a lost Bowie classic.